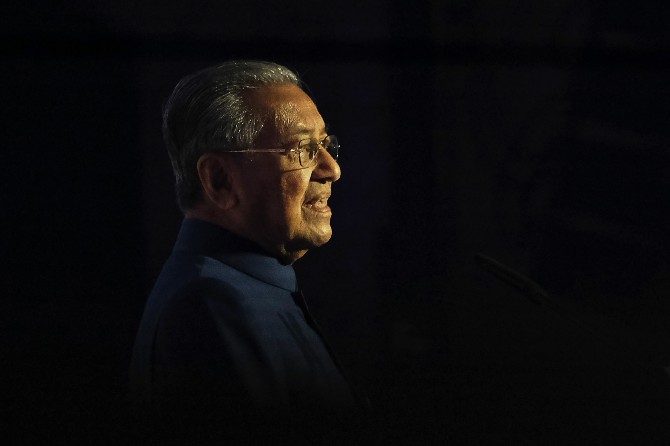 Malaysian Prime Minister Mahathir Mohamad abruptly submitted his resignation to the king yesterday and his party exited the ruling coalition, kicking off a race to form the next government of the Southeast Asian nation.
The statement from Mahathir’s office contained no other details, and he didn’t comment ahead of a meeting with the king last night. The monarch could be crucial in determining whether he forms a new government with other political parties, whether his rival Anwar Ibrahim retains enough lawmakers to lead the government, or whether a new election would take place.
Adding to the confusion, Mahathir submitted a letter of resignation to his party Bersatu, which pledged to continue supporting him even though it exited the ruling coalition. Several other political parties in the coalition also said they would continue backing Mahathir, including the mostly ethnic-Chinese Democratic Action Party, one of the largest in parliament. But it was unclear which camp had the numbers to take power.
Anwar, who met with Mahathir earlier in the day, appeared confident when speaking with reporters. His wife, Wan Azizah Wan Ismail, is in position to potentially take over from Mahathir in her capacity as deputy prime minister.
“He made it very clear in no way would he work with those in the past regime,” Anwar told reporters, referring to Mahathir. He said the king would decide whether Wan Azizah takes over as the country’s leader.
The political intrigue could bring fresh tumult to Malaysia, and deter investors looking for stability at a time when the global coronavirus epidemic and trade wars are hurting growth. Malaysia’s benchmark stock index was set to enter a bear market for the first time in 12 years, while the ringgit slumped to the lowest in almost six months.
Whatever happens will have international ramifications. Mahathir has regularly denounced the Trump administration over its trade policies, its Middle East peace plan and its approach to China: He was outspoken in lauding the advantages of using Huawei Technologies Co.’s equipment for 5G networks. Anwar, meanwhile, had enjoyed U.S. support during his time in prison and has spoken out on human-rights abuses, including China’s detention of as many as one million ethnic Uighur Muslims.
The drama had been building for months as the 94-year-old Mahathir refused to set a firm date for handing over power to Anwar. The long-time rivals had joined hands ahead of elections in 2018 for a stunning victory that ousted the previous coalition, which had ruled Malaysia for six decades.
When it took power, the new administration sought to usher in a new era of transparency and good governance, marking a rare victory for democracy and openness in Asia. It prosecuted former Prime Minister Najib Razak for corruption in the 1MDB scandal, and promised policies that aimed at helping Malaysians of all races rather than just the Malay majority. 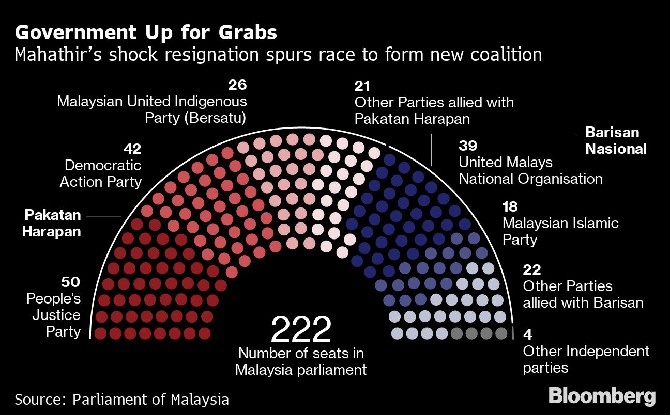 Never happened before
The outcome of the power struggle could determine whether Malaysia continues moving toward policies that treat all races equally, or reverts toward a model aimed at giving preferential treatment to Malays and indigenous groups who make up nearly 70% of the population. Those policies had prompted many educated ethnic-Chinese and Indians to look for work overseas, draining Southeast Asia’s fourth-biggest economy of some of its top talent.
“This has never happened before in Malaysia,” said James Chin, a Malaysian academic and a political analyst who heads the Asia Institute at the University of Tasmania. “What we have now is a political play to bring in a stronger Malay government, and that’s essentially it. Previously the opposition were accusing the government of being too much under the control of the Chinese.”
Chin said the king could either determine which side has a majority, call for a delay to study the situation or convince everyone to proceed with fresh elections. While the monarchy’s role in Malaysia is largely ceremonial, the king retains some discretionary powers and political leaders typically meet the ruler before announcing major political changes.
Tensions between Mahathir and Anwar came to a head over the weekend. On Sunday, Anwar confirmed that some members of his own party were working with Mahathir’s camp to form a new government, and they had met with the country’s king.
Yesterday afternoon, it was still unclear which side would command the majority of lawmakers. Several parties in Mahathir’s coalition said they would continue to support him as prime minister, and another group of 11 MPs said they were defecting from Anwar’s camp. The drama was reminiscent of the 1990s, when Anwar was ousted from Mahathir’s cabinet and arrested for sodomy.
To form a new government, Mahathir would need to work with the United Malays National Organisation, or UMNO, the party he once led before defecting, as well as the Pan-Malaysian Islamic Party, or PAS, because he wouldn’t have enough parliamentary seats to retain power without them. He must have the support from 112 out of 222 members of parliament.
Even before this latest twist, Malaysia’s political rhetoric had become increasingly divisive, with UMNO playing up racial sentiment and accusing the ruling Pakatan Harapan coalition of undermining Malay rights. A coalition that unites Mahathir’s Bersatu party with UMNO and PAS would include the key parties that represent ethnic Malays under one roof, leaving Anwar’s People’s Justice Party and the Democratic Action Party to represent a multicultural-led platform — if they hold together.
Anwar suggested that Mahathir wouldn’t join with UMNO.
“I am touched by his attitude and stance to not bow down to a group that wants to usurp power without setting an agenda of change,” Anwar said earlier yesterday.
That stance was echoed by Finance Minister Lim Guan Eng, who said Mahathir wouldn’t work with UMNO.
“This is the first time that a Malaysian prime minister is prepared to resign on principle to uphold integrity and combat corruption,” he said.  Anisah Shukry & Hadi Azmi, Bloomberg