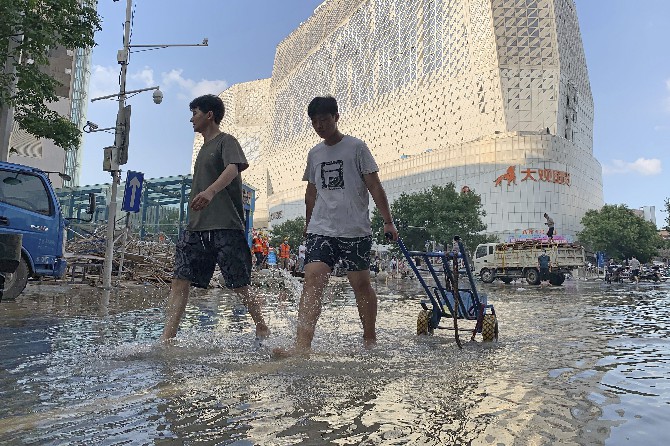 A man in central China was rescued after spending three days trapped in a flooded underground garage following torrential rains, while at least four bodies were found after a traffic tunnel was drained, a news report said Saturday.
The death toll rose to 58 after record rains hit the major city of Zhengzhou on Tuesday, state TV reported, citing Li Changxun, deputy director of Henan Provincial Emergency Management Department.
Meanwhile, rescuers used bulldozers and rubber boats to evacuate residents of areas that still were under water, according to the Shanghai news outlet The Paper.
The rains flooded a Zhengzhou subway tunnel where at least 12 people died, knocked out power to a hospital and other buildings and left streets filled with mud. Dozens of trains in the region were delayed for up to 40 hours.
Li Yongsheng was found Friday afternoon in a garage under the Jincheng International Plaza in Zhengzhou’s Jinshui District, The Paper said. It said he was trapped when the garage flooded Tuesday and lay on a ventilation duct surrounded by floating cars.
In Zhengzhou, a city of 12 million people, bodies and more than 200 wrecked cars were found in the Jingguang North Road Tunnel, where water up to 13 meters deep was pumped out, The Paper reported. Dake Kang, Zhengzhou, MDT/AP