Man with many piercings denied entry to Dubai 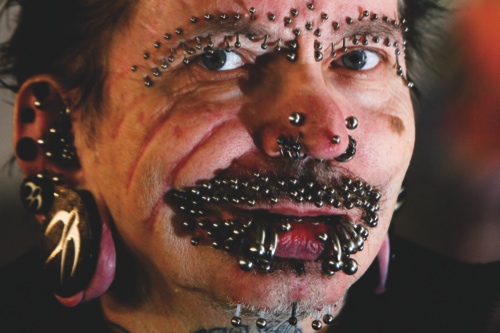 A heavily tattooed German man whose face is embellished with horn implants and more than 100 piercings said Sunday he was refused entry to Dubai without reason, forcing him to skip a planned appearance at a nightclub.
His look may have been a step too far for the Gulf’s most liberal city, where a carefully cultivated reputation for tolerance and cutting-edge cosmopolitanism occasionally clashes with the region’s conservative Islamic values.
Rolf Buchholz, 55, was traveling to the Middle Eastern commercial hub for the first time last week to appear at a circus-themed venue that woos partygoers with over-the-top attractions such as sword swallowers and burlesque dancers.
He told The Associated Press that immigration agents initially stamped his passport and let him through, but that he was stopped again before he was able to exit customs. He soon found himself in a room with other deportees.
The club said in an emailed statement that airport authorities cited “security reasons” in denying him entry. Buchholz said airport workers told him officials were concerned he could be a practitioner of black magic, though authorities did not say so directly.
“I got never an official answer,” he said. “They are friendly but nobody answers your questions.”
In addition to his body art and faux horns, Buchholz has a record 453 piercings, many of them on his face and genitals, according to Guinness World Records.
Airport and immigration officials referred questions to the police, who could not be reached for comment.
Buchholz, an information technology professional from Dortmund, Germany, had been scheduled to appear at the Cirque le Soir nightclub in Dubai’s Fairmont Hotel on Friday.
The club opened in 2011 and promises a little bit of everything: “Stilt walkers, midgets, contortionists, tattooed dancers, jugglers, drummers … swallowers, magicians and fire eaters,” according to its website.
Alcohol flows freely in Dubai bars and clubs, which are typically attached to hotels, and revelers dress just as chicly and skimpily as they would in the West.
But while Dubai is far more laid-back than nearby Saudi Arabia or Qatar, traditional Islamic values remain strong, particularly among members of the local population who are far outnumbered by foreign residents. AP