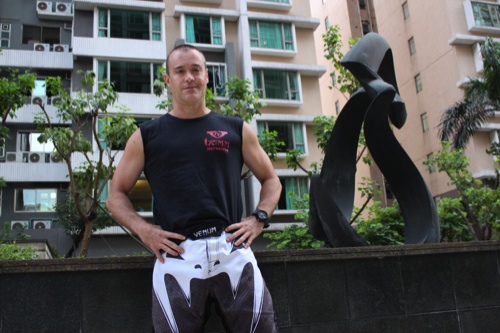 Macau has lately witnessed a range of mixed martial arts (MMA) fights, which have contributed to the city’s growing interest in the sport.
The Macau Mixed Martial Arts Federation (MMMAF) was established recently, with the aim of developing and promoting MMA in Macau as well as enabling local fighters to represent the region in international competitions.
Hugo Eduardo Monteiro, founder and president of MMMAF, spoke with the Times about the federation. From his own observations, he found that despite the considerable breadth of martial arts styles that already exist in China, there is a lack of representation.
“MMA is actually a mix of all [types of] martial arts: grappling arts, striking arts and throwing arts. It’s interesting to see that when there are so many Chinese martial arts styles; we seldom have a representative for these martial arts styles. Why don’t we have a representative for Tai-chi [or] Kung-fu doing MMA? They have a high level of flexibility, cardio, and very good skills. Why don’t they train [using] their drills under the MMA rules?”
Mr Monteiro argues that MMMAF’s establishment is serving as a medium between the leading international MMA organizations and Macau. He revealed that MMMAF has already formed an affiliation with one organization and is working on the affiliation process with two others.
“We are affiliating with the peak bodies, representing them in Macau in order to, one day, have a national team of Macau [to represent the city]… in international competitions,” the MMMAF founder said.
Moreover, Mr Monteiro believes that people in Macau are very interested in MMA training. He also observed that the city has has many talented people, and thinks that it needs some talented MMA fighters, given that the sport is growing internationally.
“People are very interested in this kind of sport. Firstly, because of the training, [which] makes people become really fit since you train like a fighter. You are training with exactly the same drills that the fighters use. Another thing is that some of the trainees are actually interested in going on to competition level,” he explained.
“Actually, Macau is hosting some of the top events in MMA nowadays. The Venetian Macao has a contract with the UFC… City of Dreams has the contract with the Legend Fighting Championship. There’s a lot of championships in Asia that need fighters,” he added.
At present, MMMAF is inviting all martial arts associations in Macau to affiliate with them. Hugo Monteiro insisted that MMMAF is not in a competitive relationship with the local organizations. Rather, he claims that joining MMMAF is a chance for them to attract more students and gain a greater reputation in the region and all over the world.
“We are not competing with them. We are saying: come and join us, practice MMA! I am not saying that the Kung-fu practitioners should change their training to MMA now. I am just saying: why don’t you prepare a couple of students who can represent your name, who can represent your activity, and [then] bring them to the international competitions? As a result, the students will have more chance of success within the martial arts field,” he said.
Nevertheless, Mr Monteiro revealed that they are experiencing some difficulties in recruiting associations due to language barriers and misperceptions.
“Most of the old sifus (masters) don’t really speak very good English, and my Mandarin is not good enough to explain [the proposition] to them,” he said.
“Another thing is the culture. I noticed that, sometimes, we were well received in the organization and everybody liked us. We were able to speak to the presidents. And then when we [passed on] the message, they didn’t really understand it. They said: why would we get involved in another association? They are kind of afraid. And we have to say: you don’t have to be afraid. We are not here to steal your students or to make your name less famous,” he explained.
He expressed the opinion that MMA is no longer only a sport, but a career path that can ensure an affluent lifestyle for successful fighters.
The MMMAF founder concluded that, whilst Macau people are taking some time to become familiar with MMA, our neighboring city Hong Kong is capitalizing on the fights taking place here.
Mr Monteiro called upon organizations in Macau to take this opportunity to start MMA classes and thereby attract more new students in order to, ultimately, facilitate local MMA champions.