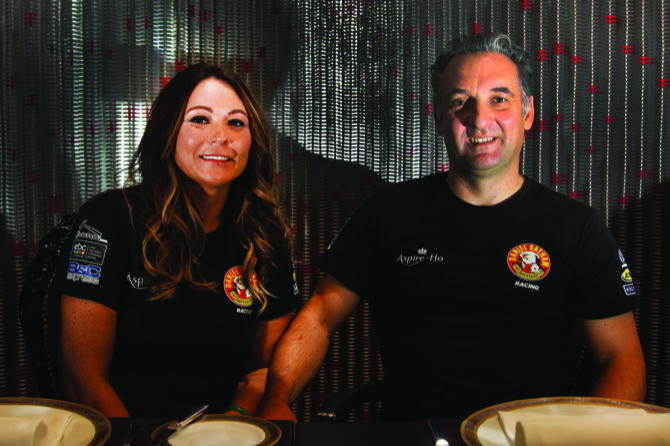 Eight-time Macau Grand Prix winner Michael Rutter is returning to the streets of Macau with a new team and grander ambitions.

The British rider will race under the colors of the new Aspire- Ho Team, which is based in the U.K. Rutter will join forces with local businesswoman Faye Ho (granddaughter of gaming tycoon Stanley Ho) and rising star Peter Hickman – himself a two-time Macau Grand Prix winner – to attack the podium.

In an exclusive interview with the Times, Rutter – whose records include Guia Circuit victories – revealed that he will ride the exclusive Honda RCV213 motorcycle for the 52nd Macau Motorcycle Grand Prix, which promises to spark excitement and curiosity about the event.

“For the past few years, I have won eight Macau Grand Prix and my teammate for this year will be Peter Hickman, who has won two. Obviously Hickman is the top rider in the British Championship, plus he won the TT this year and did the fastest ever lap. So Faye [Ho] thought it would be a good idea to put us together under [the] Aspire-Ho name and try to win this year’s Macau Grand Prix,” Rutter told the Times.

“Obviously this is never guaranteed, but between us we have won 10 Macau Grand Prix [events] so we have a good feel for it and Faye [Ho] bought a bike, [a Honda] RCV213, which is basically a MotoGP bike; a very special motorcycle,” he noted.

The motorcycle, which has never been seen in the streets of Macau, will be a major attraction of this year’s event.

“The bike is very special, no one has ever ridden one in Macau. It is just something completely different, from the sound of it to everything else really, and it will be amazing to see it around the streets of Macau.”

Rutter can still only imagine how the new ride will fare, as he will only be able to test it “in two weeks’ time.”

To the question of whether the motorcycle will impress the audience, Rutter said, “Definitely. That’s the reason why Faye thought [of] this idea. What is the best bike in the world to go with? This is probably one of the best things you can buy. It’s just unique; there are only 150 of them. It’s very rare and, of course, very expensive.”

Ho told the Times that her interest in motorcycle racing was first piqued when she started attending the Grand Prix in Macau a couple of years ago.

“[When] I moved to the U.K., I went to races a few times [and I started liking it] and when [Michael] asked if I wanted to join the team, I said yes!”

“I must say that this past year opened my eyes; I have been to most of the meetings [from Isle of Man TT to short circuits in the British and Australian championships]. It’s been interesting and a lot of fun too,” she continued.

Aspire-Ho is a U.K.-based property development business run by Ho and a business partner. The company currently develops properties in Surrey and London, but Ho may consider expanding elsewhere, including Macau.

“You can’t rule that out and we probably will be here, eventually. Obviously this is a very new project. Right now it is based in the U.K. but we […] will look into expanding into other countries and that is why for this year’s Grand Prix, we want to push it out and go wide,” she said.

Rutter noted that the Grand Prix is “a [promotional] vehicle and it’s a different way to promote as there are so many people into motorsports, [many of them] business people, and there is a lot of networking within it,” he said, adding, “it’s amazing who you meet through it. So it is definitely a good way of doing it.”

For Rutter, the great advantage lies in the “uniqueness” of the event, which features several high-level competitions both in cars and on motorcycles.

“It’s the only one in the world that runs both car racing and bike events together. It’s definitely unique,” he said. He described coming to Asia, and especially to Macau and Hong Kong, as a great surprise.

“It has been an eye-opener to come to this part of the world. It’s an amazing place to visit […] with or without the Grand Prix […] especially if you come from where I’m coming from in [the] U.K., it’s completely different.”

Questioned on his long streak of success on the course, Rutter said, “Macau GP isn’t like the Isle of Man where we race one by one [time trial mode]. Here, it’s a proper race that I think suits me more.”