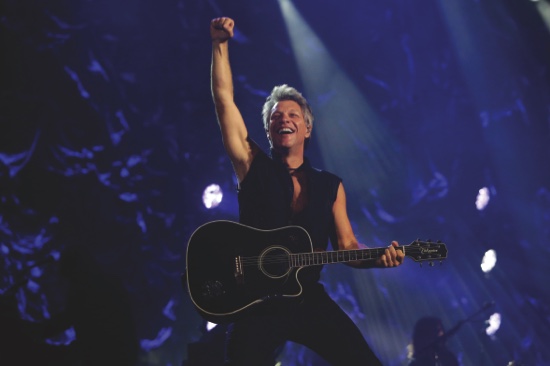 “Music is timeless and a hit song will always be good, it transcends generations…though I wish I held on to all my ripped jeans!”, Jon Bon Jovi

The title of his most famous hit may indeed be “Livin’ On A Prayer” and fortuitously for the region’s Jon Bon Jovi fans, by a twist of fate, it seems like it’s “their” prayers that may have just been answered. Much to the satisfaction of rock aficionados here, following the un-­expected cancellation of the band’s mainland China dates, Bon Jovi’s Macau stopover will be even more noteworthy considering it’s now the closest the New Jersey rockers will get to the China market. While the overzealous mainland authorities may have pulled the plug over the border, luckily the MSAR still has the freedom to don a leather jacket and a pair of ripped jeans, backcomb its hair, and sing along at full volume.

All geared up for his first ever Macau gig, lead singer and style icon Jon Bon Jovi will be appearing live and in the flesh next weekend at the Venetian as part of the group’s first ever Macau performances. As one of the most well-­known American rock groups with a four decade arsenal of hits spanning the 1980s to present, Bon Jovi’s announcement of their local debut as part of a series of concerts across Asia has already managed to generate significant buzz; yet not for the reason they’d hoped. Controversy over the shelving of the group’s mainland tour dates has managed to garner another kind of buzz – that of Chinese whispers as to the reason why. 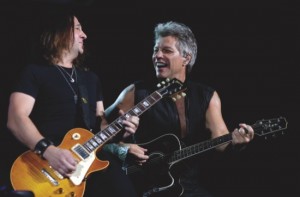 After last week’s abrupt announcement of the sudden axing of their Shanghai and Beijing gigs, online speculation has been rife. The likely culprit? Tibet and the Dalai Lama. According to the Financial Times (who first broke the story) the shows were called off because the band once included a picture of the Tibetan Buddhist leader in a video backdrop during a concert in Taiwan in 2010. And to cement further speculation on the Party’s hypersensitive reasoning, the cancellations came on the same day as the leadership held showy celebrations in Lhasa to mark 50 years of its establishment as an ethnic autonomous region.
And so from one autonomous region to a special administrative one, Macau now remains the only China location on the tour map.
Indeed the gigs were to have been the group’s first ever mainland ones and had been enthusiastically promoted by band members. Evidence of this could be seen last month when Jon sang popular love song ‘The Moon Represents My Heart’ in Mandarin for Chinese Valentine’s Day as a “special gift to Chinese fans” before the dates. Yet Bon Jovi are not the only ones to have had shows cancelled by the overzealous censors at the Ministry of Culture. In July Maroon 5 had their Shanghai performances allegedly axed over a happy birthday message one of the band members posted on Twitter to the exiled religious leader.
So from being banned, now let’s talk about the band.
Of course a bit of innocuous controversy never did any rock star any harm, especially one as famous as Jon. Tellingly, whether young or old, most people on earth can sing along to at least a couple of Bon Jovi hits. According to the man himself, who spoke to the Times via an exclusive email interview, “Livin’ On A Prayer” is indeed the group’s most popular in terms of the sheer numbers who recognize it; yet it’s also special because it holds a special place in the hearts of the band themselves. “Many people look back at their career and look for the tipping point”, Jon explained. “For us it was ‘Livin on a Prayer’. That changed our career and brought us to the next level”. 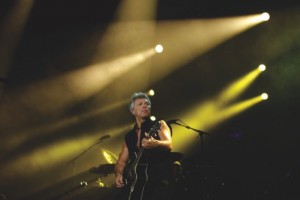 Having been in the music business for over 30 years, Jon Bon Jovi (born John Francis Bongiovi, Jr.), pianist/keyboard player David Bryan, and drummer Tico Torres now safely belong to that select club of performers who herald iconic American rock star status. Thus far, Bon Jovi have released 12 studio albums, plus two compilations and two live albums, with another one just released. One of the best-selling bands of all time, they’ve sold more than 130 million records worldwide and performed more than 2,900 concerts in over 55 countries for more than 37 million fans. “First and foremost we see ourselves as singer songwriters, always honing our craft”, writes Jon. “That said, it’s a lot of hard work but to be following my passion for all of these years and to have it be a career is an incredible way to make a living”.
Bon Jovi’s musical style has generally been characterized as ‘pop metal’, rock and ‘glam rock’, but Jon is averse to labels, preferring instead to let the songs speak for themselves. “Our music is uplifting and empowering. Most people enjoy music for the sake of music; we do not see the need to categorize it”, he stated.
Yet as well as the music, part of Bon Jovi’s appeal is also the fashion. The current ‘80s and ‘90s revival in terms of style and music certainly hasn’t done them any harm, and they’re just as popular with millenials as with their own generation. “Music is timeless and a hit song will always be good, it transcends generations”, Jon acknowledged, adding, “Though I wish I held on to all my ripped jeans!”
With a huge catalog of worldwide hits including ‘You Give Love A Bad Name’, ‘Who Says You Can’t Go Home’ and ‘It’s My Life’ to name a few, it would be easy for the band to rest on their laurels. But they’re still working as hard as ever, having just debited their newest single in July with an album released last month. “This will be Bon Jovi’s first album since ‘What About Now’. It’s our latest, it’s not our next”, says Jon. “This is sort of the end of a cycle, not the beginning of a new one. But some of the songs are ten years old”.
So while they may have seen and done it all in their glamorous 32-year-careers, visiting Macau will be a first for the trio. When on tour, they always try to get a feel for the distinctive characteristics of each place they visit. “We love to sightsee and try the local food”, writes Jon. For their Macau stay at the Venetian, he hopes for “maybe a golf game in the morning and then go experience what the nightlife is like. We really like to see what unique activities there are in each city”.
For a unique city, it promises to be a unique concert indeed.