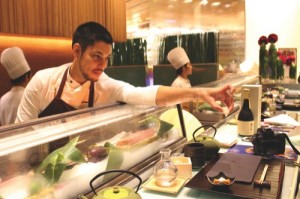 Michelin-starred chef Jeff Ramsey will be visiting MGM Macau from today until August 24, bringing with him his sushi creations.
Born in Japan and having begun his culinary training in 1996 at Japanese sushi establishments in Bethesda, Jeff Ramsey left the United States around 10 years ago and returned to Japan for six years.
He has also travelled to several places such as Hawaii and Bali and is skilled at using a contemporary and creative style to cook Japanese sushi by means of combining a variety of different traditional ingredients.
Speaking to the media yesterday, Jeff Ramsey said prime ingredients are a main feature of his menu available at MGM Macau.
The chef is very satisfied with the quality of the products and the fact that they are free from pollutants. “That area of Japan [where the ingredients are from] is probably my favorite area of [the country]… because they have amazing meat and seafood.”
Due to the high quality of the seafood, Jeff Ramsey said that he seeks to present the guests with the original taste of the ingredients. “I don’t do so much to the sushi. I try to get the good fish, which we did… I lightly seasoned it. I just look to perfect the technique. If it is raw, [I will think about] how to make this raw fish taste the best [and] what I am going to do to the fish,” the chef said.
He also named two dishes on his menu in MGM as his favorites, which were the “Wagyu to Uni” (wagyu beef and sea urchin) and “Iwashi Isobemaki” (sardine wrapped in seaweed).
The Michelin-starred chef thinks that the wagyu dish is “decadent” and it is not easy to have this kind of high quality beef all the time. “It’s a one-bite kind of a special bang,” he declared.
He also likes the sardines because they are his favorite fish and the fact that they are in season now. “It’s raw and I don’t even salt the [sardine]… It has a lot of moisture, a lot of fat content [and] really tasty. It’s a classic flavor combination.”
Moreover, Jeff Ramsey talked about his cooking philosophy. He recalled that when he was working in sushi restaurants in Japan, “they are rather quiet and you are not allowed to talk.” Ramsey said that is not the way he wants his guests to enjoy his sushi. As a result, he likes to use his creativity, “making funny combinations of flavors.”
The chef also revealed that he is planning to open his own restaurant in January next year in Kuala Lumpur. “I want to utilize the local ingredients and cook it in a refined modern approach,” he said.
Being in Macau for the first time, Jeff Ramsey said that his colleagues will take him to different restaurants in the city so he can try the local cuisine. JPL