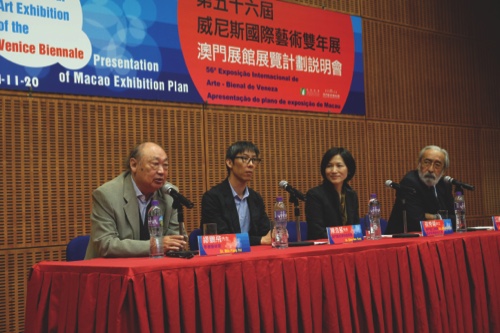 When Chinese painter Mio Pang Fei first travelled to Europe back in the 1980s, he spent hours studying Western painting traditions and styles. “It was wonderful. I could stand one hour in front of a painting to study how it was done,” he said. Ever since he moved from Shanghai to Macau in 1982, Mio Pang Fei embarked on an artistic journey that embraced Western and Eastern art concepts and aesthetics.
Mr Mio was unanimously chosen by a Macau Museum of Art Committee to represent Macau in next year’s Venice Art Biennale, taking place in Italy between May 9 and November 22.
António Conceição Junior, a consultant for the Macau Museum of Art, stated at a press conference last week that the choice of Mio Pang Fei to represent the city, “has deep meaning, since he has dedicated all of this life and work to art in Macau.”
Mr Conceição Jr recalled how Mio faced many difficulties as an artist when he lived in China, particularly throughout the Cultural Revolution. “If he wanted to paint [using different techniques and concepts from those socially accepted] he would have to destroy them afterwards,” he stressed.
Once in Macau, Mr Conceição Jr said, he was willing to take any humble position, still working hard to incorporate Western concepts in his art until he reached a higher artistic status.
Another member of the Macau Museum of Art committee, Ms Hsu Hsiu-Chu, director of the School of Arts at the Macau Polytechnic Institute, said that his work depicts his moving experience: “It is related to moving from Shanghai to Macau; it’s about humanity, the environment and a societal change.”
Once in Macau, Mio Pang Fei found the much-needed freedom to simply make art. He chose a combination of the Chinese tradition and Western contemporary techniques, which he then named “neo-orientalism.”
Ms Hsiu-Chu recalled that in terms of naturalism, his paintings have an abstract appearance related to the environment. The way the artist manages to touch viewers’ emotions was one of the reasons why the committee chose Mio, who turns 80 next year.
Speaking to reporters on the sidelines of the press conference, the Chinese painter assured he was honored to represent Macau in the Venice Biennale. He thinks it’s the right time because last year they chose local architect Carlos Marreiros. “Last edition was focused on architecture and next year will be mainly about art, so I think it’s more appropriate for my creations,” he said.
Mio acknowledged that while he’s turning 80 next year, a long flight to Europe will be a challenge. But he’s certainly up for it. “I will try my best,” he assured, adding that he will be presenting both his “water margin” works as well as his “post-calligraphy” series. He will also be working on re-creations of paintings that he had to destroy during the Cultural Revolution.
The Macau exhibition at the 56th Venice Biennale, titled “Path: Adventure of an Artist,” features two main collections of paintings and installations created by Mio Pang Fei from the 1960s and beyond, the Macau Museum of Art said in a statement.
The painter stated it will certainly be emotional to observe Western contemporary art again, but not to the extent of when he first visited Europe in the 1980s. “At that time, I had never been outside China (…) so part of what I saw exceeded my expectations back then,” he recalled.
Mio Pang Fei added he would be observing other exhibitors’ art to later write essays on his experiences there.
The director of the Macau Museum of Art, Mr Chan Hou Seng, said that the veteran was selected from a field of 40 artists to represent Macau in the Biennale.
The artist was born in 1936 in Shanghai and graduated from the Faculty of Fine Arts of Fujian Provincial Institute. He moved to Macau to pursue a professional career as a painter, and later taught at the Visual Arts Academy of Macau (predecessor of IMP’s School of Arts), Nanjing Arts University, and the College of Fine Arts at Shanghai University, among other institutions.
Founded in 1895, the Venice Art Biennale is one of the world’s major contemporary art exhibitions. Mio Pang Fei’s participation marks Macau’s fifth exhibition at the art event.

A documentary on Mio Pang Fei will be exhibited at Galaxy Cinemas on December 4 at 7:00pm. Directed by Macau resident Pedro Cardeira, the documentary, titled “Mio Pang Fei”, has also been selected to enter the Portuguese Doclisboa Film Festival 2014 competition. It features the life and work of the Macau-based artist, who witnessed major social, political and cultural changes in mainland China. Mio Pang Fei soon developed interest in Western art movements, but during the Cultural Revolution, he was forced to abandon Western art trends.