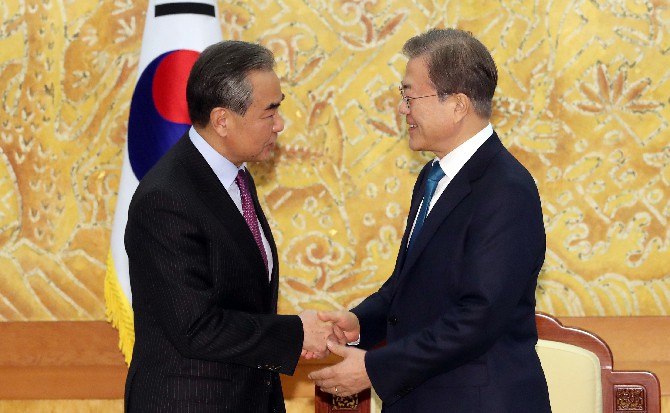 South Korean President Moon Jae-in said yesterday the global diplomatic push to defuse the nuclear standoff with North Korea is at a “critical crossroads” and called for China to continue serving a “positive role” in denuclearizing the Korean Peninsula and stabilizing peace.
Moon made the comments during a meeting with Chinese Foreign Minister Wang Yi at Seoul’s presidential Blue House. Wang made his first visit in four years amid efforts to patch up relations damaged by South Korea’s deployment of a U.S. anti-missile system China perceives as a security threat.
“The process for the complete denuclearizing of the Korean Peninsula and permanently stabilizing peace is at a critical crossroads,” Moon said. “I would like to ask for continuous support from the Chinese government until the new era of a peaceful and denuclearized Korean Peninsula opens.”
Wang called for stronger “strategic communication” between Beijing and Seoul and took a jab at the Trump administration, which is locked in trade war with Beijing, saying that international order was being threatened by “unilateralism” and “forcible politics.”
“China and South Korea as neighbors should strengthen dialogue and cooperation to jointly uphold multilateralism and free trade,” Wang said.
The Blue House said Moon during his meeting with Wang called for stronger bilateral efforts to facilitate tourism between the countries and expressed hope that Chinese President Xi Jinping would visit South Korea at an “early time” next year.
Wang told Moon that China would continue to play a “constructive role” in the efforts to peacefully resolve the nuclear crisis despite “recent difficulties in the political situation surrounding the Korean Peninsula,” the Blue House said.
Wang on Wednesday met with South Korean Foreign Minister Kang Kyung-wha and discussed issues related to North Korea and details of a trilateral summit between Seoul, Beijing and Tokyo planned later this month in China. They also discussed facilitating high-level exchanges and arranging a possible visit to South Korea by Chinese President Xi Jinping next year, South Korea’s Foreign Ministry said.
His visit comes after years of tensions over the U.S. Terminal High Altitude Area Defense, or THAAD, system placed in southern South Korea and amid concerns that a U.S.-led diplomatic push to resolve a nuclear standoff with North Korea is beginning to fall apart over disagreements in exchanging sanctions relief and disarmament.
With the talks faltering, North Korean leader Kim Jong Un has intensified his missile testing activity while issuing an end-of-year deadline for the Trump administration to offer mutually acceptable terms for a deal to salvage the diplomacy.
There’s also uneasiness over the U.S.-China trade war, which has hurt South Korea’s export-dependent economy and included U.S. demands that South Korean companies stop using equipment from Chinese technology giant Huawei based on security concerns.
Wang last visited South Korea in 2015, a year before relations soured over Seoul’s decision to deploy THAAD, which China claimed could be reconfigured to peer deep into its territory. South Korea has said China retaliated by limiting Chinese tour group visits to South Korea, whose economy is increasingly dependent on Chinese tourism, and demand for its industrial products.
In Beijing, Chinese Foreign Ministry spokeswoman Hua Chunying mentioned THAAD among issues affecting the bilateral ties that the sides had “agreed to continue to properly deal with.”
Hua also reiterated China’s position that North Korea’s “legitimate concerns […] in terms of security and development should be taken seriously,” and that the North should be offered sanctions relief “in light of the development of the situation so as to encourage all parties to move forward in the direction of political settlement. Kim Tong-Hyung, Seoul, AP

Huawei’s CEO dismisses looming threat of a US escalation