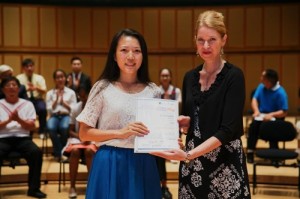 The Macao Youth Choir of the Macau Conservatory won a gold medal in the 1st Singapore International Choral Festival, the Cultural Affairs Bureau revealed.
Under the leadership of the director of the conservatory’s music school, Liu Chang, the choir won its gold medal on the competition’s fourth day.
“In the year that marks the 15th anniversary of Macau’s handover to China, the Macao Youth Choir celebrates its 10th anniversary, giving special significance to this invitation to represent the city and to the remarkable result achieved in the event,” the Cultural Affairs Bureau declared in a statement.
The Macao Youth Choir performed their interpretations of the religious Ave Maria, the Hungarian folk song “Egyetem, Begyetem,” and the Chinese work “Swallow,” under the direction of conductor Liu Mingyan. “The Macau participants, the second highest rated group in the competition, were greatly moved by coming first in the equal voices category, having finally seen their efforts acknowledged in the international arena,” the Cultural Affairs Bureau stressed.
In addition to participating in the 1st Singapore International Choral Festival, Macau’s choir was also invited to perform outdoors, serenading local passersby with choral chants.
Competition producers have shown interest in inviting the group to perform in Singapore again. The Conservatory’s Music School Director, Liu Chang, said that future success depends on the willingness and cooperation of parents, as well as on selfless dedication from students. Liu Chang added that they hope for further opportunities to compete overseas.
The young singers believe that their participation in an international competition will allow them to raise the quality of the local choir, while broadening their international artistic horizons.
The Macao Youth Choir was established in 2004 with the aim of increasing students’ cultural and musical understanding, whilst enriching their extracurricular activities and enhancing their knowledge of all music genres.  CP