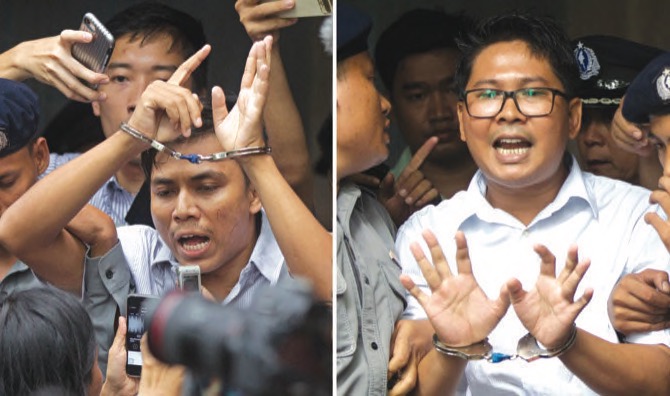 Wa Lone and Kyaw Soe Oo earlier this month shared with their colleagues the Pulitzer Prize for international reporting, one of journalism’s highest honors. The reporters were arrested in December 2017 and sentenced last September after being accused of illegally possessing official documents, a violation of a colonial-era law.

The court did not given a reason for its decision, which was quickly decried by rights advocates.

“Wa Lone and Kyaw Soe Oo should never have been arrested, much less prosecuted, for doing their jobs as investigative journalists,” said Phil Robertson, deputy Asia director for New York-based Human Rights Watch. “Sadly, when it comes to media freedom, both Myanmar’s military and the civilian government seem equally determined to extinguish any ability to question their misrule and rights violations.”

Wa Lone and Kyaw Soe Oo, who are being held in a prison in Yangon, were not present for the ruling, but their wives were. Kyaw Soe Oo’s wife, Chit Su, broke down in tears when the ruling was read.

“Both he and I hoped for the best,” Chit Su told reporters. “I am terribly sad for this decision.”

Wa Lone, 32, and Kyaw Soe Oo, 28, had denied the charges against them and contended they were framed by police. International rights groups, media freedom organizations, U.N experts and several governments condemned their conviction as an injustice and an attack on freedom of the press.

“Wa Lone and Kyaw Soe Oo did not commit any crime, nor was there any proof that they did,” Gail Gove, Reuters chief counsel, said in a statement after the ruling.  “Instead, they were victims of a police setup to silence their truthful reporting. We will continue to do all we can to free them as soon as possible.”

Khin Maung Zaw, a lawyer for the two, said the pair could still seek their freedom by petitioning the president’s office or the legislature.

President Win Myint could reduce the sentence, order a retrial or have them released. Legislative action for a retrial would be a lengthier, more complicated process.

“I am greatly disappointed by the decision of the court because it damaged very much our country’s prestige and our right of information and press freedom,” Khin Maung Zaw said. “But I’m not losing hope completely, because all the whole world is on our side. So, as I always said, the case was lost, but the cause was won throughout the whole world. “

Myanmar’s military launched a brutal counterinsurgency campaign in the western state of Rakhine in 2017, driving more than 700,000 members of the Muslim Rohingya minority to flee to Bangladesh.

The Reuters reporters had worked on an investigation of the killing of 10 Rohingya villagers in Inn Din village, for which the government last year said seven soldiers were sentenced to up 10 years in prison with hard labor.

Investigators working for the U.N.’s top human rights body said last year that genocide charges should be brought against senior Myanmar military officers, while other critics accused the army of ethnic cleansing. AP