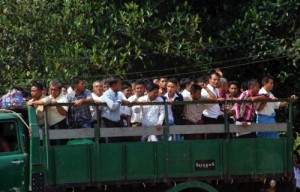 The Myanmar government pardoned 3,073 prisoners yesterday as part of an amnesty that rights groups said included more than a dozen political prisoners, a month before a summit of regional leaders convenes in the country.
The Ministry of Information announced the amnesty on its website, saying the prisoners were being freed “on humanitarian grounds.” It did not refer specifically to political prisoners. Most of those released had committed minor crimes.
The official Political Prisoner Scrutiny Committee said that at least 13 of those pardoned were jailed on political offenses and at least eight were former senior military intelligence officers detained after the 2004 ouster of former intelligence chief and Prime Minister Khin Nyunt.
Ye Aung, a former prisoner himself and now a member of the government committee, said the amnesty appeared to have been timed ahead of a meeting of Asia-Pacific leaders in Myanmar next month.
He praised the release, but called for the freedom of about 75 political prisoners who remain detained.
President Thein Sein, a former general who was elected in 2011 after five decades of military rule, had pledged to free all political offenders by the end of the year. He has freed more than 1,000 political prisoners since taking office but critics note that people continue to be locked up for political offenses under his nominally civilian government.
It has become a pattern for prison amnesties to coincide with high-profile international or regional meetings as a way of highlighting what the Myanmar government says are its benevolent policies. AP