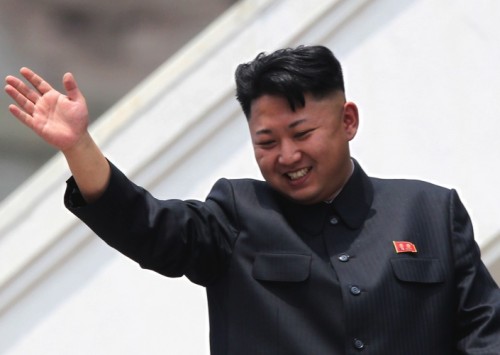 North Korea’s authoritarian leader makes no public appearances for three weeks, skipping a high-profile event he usually attends. An official documentary shows him limping and overweight and mentions his “discomfort.” What follows is a smorgasbord of media speculation about what’s eating Kim Jong Un.
Maybe it’s gout, unidentified sources tell South Korean reporters, or diabetes, or high blood pressure. A thinly sourced British report says the Swiss-educated dictator has been laid low by a massive cheese addiction. A headline in Seoul offers up the possibility of a common South Korean obsession: fried chicken and beer.
So what’s going on? Maybe not much.
As is always the case, much more than what’s seen publicly is happening behind the well-guarded scenes with North Korea’s No. 1. But just the fact that Pyongyang acknowledges that Kim is ailing suggests that he may not be suffering from anything particularly serious. The hugely micromanaged state media, for instance, were tight-lipped when Kim’s father, Kim Jong Il, suffered major health problems late in his rule.
The intense outside fascination with even scraps of information creates a scramble in South Korea and the West to play up any hint of change or turmoil in a country notorious for resisting outside prodding and for releasing information only as it sees fit.
North Korea is unique: a poor, largely cloistered, fiercely proud, nominally Stalinist country led from its founding in 1948 by a family that has passed down power through three generations. It’s also in possession of a handful of crude nuclear bombs and working toward producing nuclear-armed missiles that could target the mainland United States.
Because of this, there’s powerful curiosity about what would happen should Kim Jong Un be incapacitated. Kim is believed to have been groomed for the leadership by Kim Jong Il after the elder man suffered a stroke in 2008. Kim Jong Un, who is thought to be 31, reportedly has at least one young daughter but no adult heirs.
The recent health speculation started when Kim, always a large man, began showing up in pictures and video noticeably heavier, and with a distinct limp. For more than three weeks, he hasn’t been seen performing his customary public duties in state media coverage, according to Seoul’s Unification Ministry, which monitors the North.
And then, on Thursday, his usual seat was empty at a session of the country’s rubber stamp parliament. Although Kim Jong Il occasionally missed the meetings, it was the first no-show for Kim Jong Un since he took over after his father’s death in late 2011, Seoul officials said.
The same day as the parliamentary meeting, the North aired a documentary with footage from August that showed a limping Kim inspecting a tile factory. “Our marshal continues to light the path for the people like a flame despite his discomfort,” a narrator said.
The documentary, which was shown again yesterday, marked the first and only time state media have made a direct comment on Kim’s health since he took power, the Unification Ministry said.
South Korean officials told reporters yesterday they don’t think anything serious is happening, but that hasn’t stopped the rumors.
North Korea’s propaganda specialists carefully construct their media images, especially those of Kim, with an eye on the domestic elite and, to a lesser extent, on foreign, mostly South Korean, audiences.
The recent images of Kim limping and the documentary are “an attempt to quell rumors within the North Korean public and show confidence that Kim’s health problems are trivial,” said Koh Yu-hwan, a North Korea expert at Dongguk University in Seoul.
Kim Jong Il was reportedly a very sick man in the last years of his life, but state media was silent about the reported 2008 stroke.
Kim Jong Un is usually a near-constant one-man show in state media, but he has kept a low profile before. In 2012, he wasn’t seen publicly for about three weeks, South Korean officials say.
Senior North Korean officials do vanish on occasion — sometimes for good.
After surviving several earlier purges, Kim’s uncle, Jang Song Thaek, was publicly shamed and then executed on treason charges in December 2013. In 2012, North Korea purged its army chief, which also caused wild speculation in Seoul, including a report from a South Korean newspaper, citing “unconfirmed intelligence reports,” that Ri Yong Ho may have been wounded or killed in a blaze of gunfire when soldiers loyal to him resisted an armed attempt to detain him. Ri’s fate is still unknown.
Whatever’s going on, avid North Korea watchers will get another chance for a carefully staged look on Oct. 10, when the North stages a celebration of the founding anniversary for the ruling Workers’ Party. Foster Klug, Seoul, AP

US envoy says no talks with N Korea in sight

Washington believes that North Korea is increasingly unwilling to live up to its nuclear disarmament commitments, and is using three detained Americans as pawns, a senior U.S. envoy said yesterday.
Glyn Davies, the U.S. special representative for North Korea policy, told reporters in Beijing that North Korea’s unwillingness to release the three Americans is an impediment to resuming disarmament talks.
“We remain open to having a responsible dialogue with North Korea if they were signaling willingness of meeting us half way. But we haven’t seen that yet,” he said, adding that the detained Americans are being used as pawns. “They are really using them,” he said.
He said North Korea is drifting further away from its obligations to denuclearize.
North Korean Foreign Minister Ri Su Yong told the United Nations General Assembly over the weekend that his country’s nuclear program is not “a bargaining chip,” but is needed to guard against U.S. hostility.
Davies met with his Chinese counterpart Wu Dawei to discuss how to bring North Korea back to disarmament negotiations.