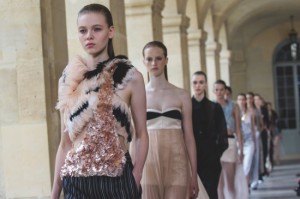 Chanel’s guests were led to their seats in a giant recreated casino this week inside Paris’ Grand Palais — replete with roulette tables and fully-functioning gambling machines that had one Chinese fashionista addicted within minutes.
But the real gasps came when Kristen Stewart and a diamond-
encrusted Julianne Moore walked out through an arch — both wearing bespoke Chanel couture — to take a seat around a celebrity-filled poker table in the center of the catwalk. There they hugged, chatted, gambled and laughed all through the show. 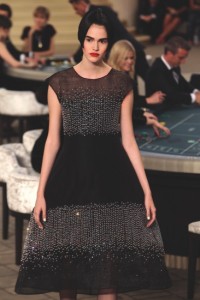 Moore and Stewart grew close as they co-starred in “Still Alice,” playing mother and daughter. They both dined together in an exclusive Paris restaurant last weekend.
“I like people when they’re gambling and well dressed like in Monte Carlo,” said Lagerfeld.
Fellow gamblers placing bets included singers Rita Ora and Vanessa Paradis and model Lara Stone, who were there to showcase Chanel’s latest jewelry collection.

CHANEL’S 3-D COUTURE
Lagerfeld, 81, says the secret to feeling young is always looking to the future.
Nothing demonstrated this better than Chanel’s bright, high-tech couture show that featured Coco Chanel’s famed skirt-suit jacket made via 3-D printing.
“I like the idea of taking the most iconic jacket of the 20th century and turning that into an object that was impossible to make when that jacket was invented,” explained the couturier.
The quilted jackets were completely seamless and seamstress-less — created by feeding Lagerfeld’s sketches into a computer program, that the couturier eccentrically named “Sweetie.”
“Computers are going to enter more and more in the evolution and techniques of fashion — you cannot resist. On the contrary, if it exists in its time couture will live on,” he said.

CHANEL’S ‘80s SHOULDERS
A 1980s flavor lingered in the air for fall-winter in a largely black-and-
white show, with oversized truncated jackets, large square shoulders, epaulettes and dramatic lapels.
The shoes were a standout — backless stilettos with a split tongue on the front that Lagerfeld compared to “airplanes children make with folded paper.”
The 67-piece-stong collection mainly played it safe, but designs loosened up toward the end, frothily, with tailoring that harked to the fizz fizz years of the ‘20s. Feathered fringing adorned loose, long cocktail dresses, evoking the famed “Flapper” era.
Meanwhile, modernized ‘20s “bob” wigs — worn in identical form by all models — also mirrored this era, giving the collection a homogenous, fem-bot feel that riffed on the futuristic 3-D printing concept. 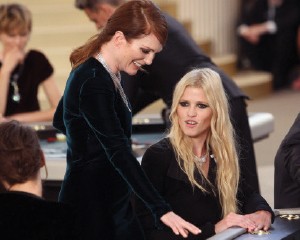 ARMANI AND STARS ATTEND SHOWS BUT NOT DINNER
Co-stars from 2009’s “The International,” Naomi Watts and Clive Owen caught up with each other at the Armani Prive Show, sitting side by side.
Nearby, was French Oscar-winning actress Juliette Binoche — who confessed that she didn’t know designer Giorgio Armani all that well, as he doesn’t attend dinners he invites her to.
“Each time we meet there’s a tenderness and respect … We’ve never had dinner, really. He leaves everyone to have dinner and goes home; probably thinks about the next season,” she said, laughing.

ARMANI IS ELEGANT BUT DOESN’T TAKE RISKS
It was, as ever, an elegant affair at Armani Prive, with the 80-year-old couturier serving up his expected array of satin gowns, jacquard skirts, feathered fringing, and long evening dresses embroidered with lashings of Swarovski crystals and sequins.
The color palette of the 47-look-s
how beautifully evoked the last moments of the evening, as it has in previous seasons; with fuchsia pink, turning ultra-marine blue, purple and black.
Peak shoulders on jackets and backless dresses were the season’s focus, alongside Siamese-looking fitted jackets. They cut a distinct style alongside short black wigs on models, though have done without the overly-billowing, segmented satin pants.
Though Armani is, with reason, one of the most respected designers in the world, in his couture he could afford to push the creative envelope more and be more adventurous. 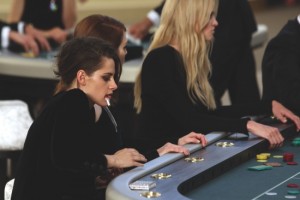 BOUCHRA JARRAR MAKES CONTRASTS
Bouchra Jarrar mixed her signature contrasting styles with a dash of the ‘50s in her slick show.
Bandeau-style croptops evoked one-
half of a post-War bikini — worn over high-waisted retro pants or softly colored voluminous culottes that could have been worn by Marilyn Monroe.
As ever with the Moroccan-born designer, contradictions were whispered in the textures and styles. Feminine pale blues, yellows and nude pink were punctuated with flashes of black.
And several looks mixed up sportswear, daywear and eveningwear with panache. One couture textured taupe croptop had an exposed midriff, a sporty miniskirt and glamorous ankle-length sheer organza.
Jarrar showed off her couture talent with a series of multi-color, frothy, fur-feather asymmetrical tops — and again, in her signature draping with a beautiful pale blue gown with a gold band. 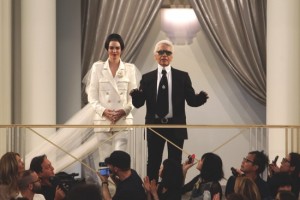 YACINE AOUADI
Debut designer Yacine Aouadi channeled black in his couture presentation, saying it’s the color associated with mystery.
“For my first collection, I wanted to evoke superstition, so I used black, as I’m still afraid if my (fashion) house is going to take off or not,” he said humbly from the show venue in the Grand Palais.
The 13-piece-strong show would seem to set the French-born designer, who cut his teeth at Balmain, in a good place.
Aouadi mixed Victorian styles such as high austere collars and intricate black lacework with sporty cropped skirts and zippers, and sheer organza sections with decorative writing that, when worn on skin, resembles tattoos.
“I wanted to mix in the tattoo elements, to break up the historic allusions,” he said.
He struck a fine balance, mixing sometimes ecclesiastical styles and myriad chevrons with clean, gentle A-line shapes into highly wearable looks. Thomas Adamson, AP Fashion Writer