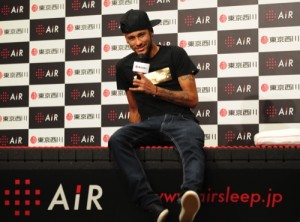 Barcelona striker Neymar says he is almost back to full fitness after his serious back injury suffered at the World Cup. The 22-year-old Neymar made a promotional trip to Tokyo where he will film a commercial for a Japanese mattress company. About 700 fans greeted him at Tokyo’s Haneda Airport on yesterday.
“It’s all good, my back is improving, it’s almost 100 percent,” Neymar said at a press conference. “I’m looking forward to joining my teammates and helping them win the title.”
Neymar’s first World Cup ended in disappointment when he was carried off the field on a stretcher with a fractured vertebra during Brazil’s quarterfinal win over Colombia.
Before his injury, Neymar scored four goals in his five games and was considered one of the stand-out players of the tournament. Half of Brazil’s goals until then were scored by him.
Barcelona’s season starts on Aug. 24 and the club has said Neymar’s recovery from injury was progressing “very well.”
“This mattress feels great, I am sure it will help me in my recovery,” Neymar said. “I had a long trip here so I’m looking forward to testing this mattress tonight.”
Neymar was on a busy schedule during his Japan trip. In addition to shooting a commercial, he made several TV appearances where he fielded questions about football technique from young Japanese players. AP