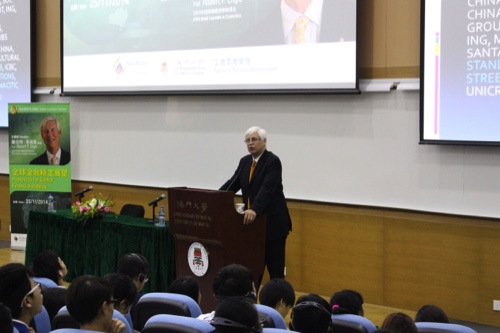 In a public lecture on Tuesday, the 2003 Nobel laureate in Economics, professor Robert Engle, said that Macau should diversify the investment portfolio of its reserve in order to counter potential risks. He also suggested that, given the nature of the Macau economy, which depends heavily on the Chinese economy, authorities should prevent investing in China.
In a presentation entitled “Prospects for Global Financial Stability” at the University of Macau, prof Engle shared his thoughts on the future of global finance, and discussed a method for estimating how much capital a financial firm would need to raise if another financial crisis occurs.
At the Q&A session, he was asked to comment on the Macau government’s plan to establish a sovereign fund in which to invest its MOP240 billion reserves. He said that ‘the natural starting point’ for managing the investment portfolio is diversification. “Diversification would mean internationally diversifying this portfolio, holding stocks and bonds and probably commodities and so forth from around the world, as well as probably currencies,” he said.
“You probably want to hold it in a relatively conservative fashion because of the political impact of a downturn. So that would mean a little more on the bond market than in the stock market.”
Robert Engle added that while the profit made from investing into bonds may not be able to beat inflation on account of the current low interest rate, he does not believe that the portfolio should be “too adventurous”. Instead, investment should be managed “ordinarily and passively”.
The Nobel laureate also pointed out that the public has to be ready for the risks all investors have to face. However, with a diversified investment portfolio, it is likely that the MSAR will not be too sensitive to any one of the risks it will encounter in the future. “You should be prepared for those risks, but [they are] minimized by diversifying,” he said.
The Nobel laureate later talked to the media on the sidelines of the lecture and continued to comment on the investment of Macau’s reserve. He said that if the biggest risk to Macau’s economy is the Chinese economy, “then you want to, actually, not invest at all in the Chinese economy.”
“If anything, you should short the Chinese economy and invest in other assets around the world. So, if the Chinese economy does well, [the profit] of your portfolio will go down. But money will be flowing [into Macau] and [the city will] be prosperous,” he explained.
Nevertheless, Mr Engle agreed that the world economy will not be in any better shape if the mainland economy collapses, which means that it is difficult to become uncorrelated from it. “But you might try your best to be not perfectly correlated with the Chinese economy,” he said.
The lecturer also spoke of the risks he sees in the mainland economy. Engle pointed out that the growth of debts in Chinese municipal governments and state-owned enterprises are “particularly apparent”. He suggested that some of the biggest banks in China are facing high risks because of the amount of debt in the banking system.
However, the Nobel laureate believes that the situation in China is different from that in countries like Portugal and Italy. Since many big enterprises and banks are owned by the state, there is the implication that the Chinese authorities will rescue them instead of allowing them to go bankrupt.
Moreover, he believes that the Chinese state does have enough foreign reserves to recapitalize its banks and keep the system from falling apart. But given the recent economic slow-
down, Prof Engle said that the Chinese government may face difficulties in deciding whether to allocate the reserves to recapitalize the banking system or to make improvements in the lives of Chinese citizens, through measures such as developing better education and health systems.
“My feeling is that the systemic risk is not that great today in China… I think the reserves are there to cover these kinds of risks. But it would be very expensive for the Chinese government, and they are going to want to make sure that it doesn’t happen again, and that’s actually not so easy to do,” he concluded.
Prof Engle is the Michael Armellino Professor of Management and Financial Services of New York University Stern and director of the university’s Volatility Institute. He was awarded the Nobel Prize in Economics for his research on the concept of autoregressive conditional heteroskedasticity (ARCH). His ARCH model and its generalizations have become indispensable tools, not only for researchers but also for analysts of financial markets.

Dean of the UM Faculty of Business Administration, Jacky So Yuk Chow, said on the sidelines of the public lecture that he agreed lawmakers and residents who are not in the finance or business sector should be educated on the concept of risk and return in the investment of Macau’s reserve.
Mr So is a member of the government’s Financial Reserve Supervising Committee. He revealed that, in meetings, committee members have actually discussed the need to educate lawmakers and the public about the risks of investing the public reserves. He mentioned that the opinion from the public was that the return of the financial reserve investment was too low. However, he stressed that the principle of managing Macau’s financial reserves is to keep it safe instead of focusing on the profit that can be generated from it.
“You don’t look at the return only. You have to look at the risks. Because the nature of this reserve must be safe and liquid, you don’t want too much risk. Yes, you could increase the risk a little bit. But I would not advise increasing it too much, because you may end up losing your shirt,” he said.
The dean also commented on the suggestion that the government should hire investment bankers from the private sector to manage the fund; he pointed out that not only do those bankers charge a substantial fee, their performance is not as good as people would anticipate.