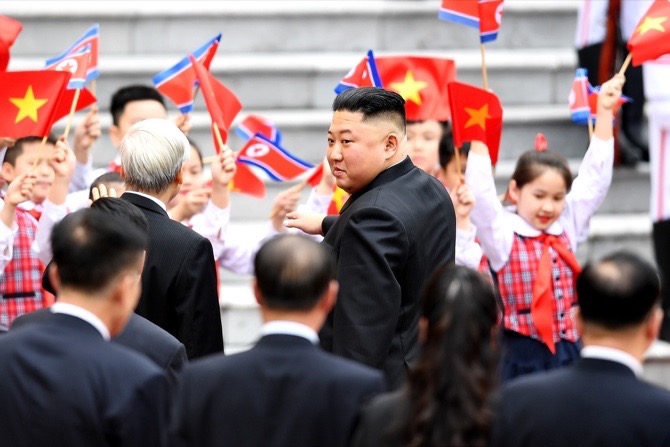 North Korean leader Kim Jong Un is showing signs he might fire his first rocket in 15 months. Long-time observers suspect he is bluffing.

Two days after Kim’s summit with U.S. President Donald Trump broke down over sanctions relief and disarmament steps last month, satellite images showed that North Korea was rebuilding a long-range rocket site it recently dismantled. The activity suggests that the country could be preparing to launch a missile or satellite that would push back against Trump while providing valuable data to improve his weapons capability.

“It is a big gamble,” said Jenny Town, managing editor for the North Korea-focused 38 North website. “If North Korea does launch a satellite, it could derail all of North Korea’s diplomatic goodwill built up over the past year.”

Besides potentially angering Trump, North Korea must avoid undercutting support for sanctions relief from China and Russia. Both nations, which wield vetoes on the United Nations Security Council, approved the penalties after the country tested nuclear bombs and ballistic missiles in defiance of international prohibitions.

Any launch would be the first since Kim fired off an intercontinental ballistic missile in November 2017 capable of reaching any U.S. city and declared his weapons program complete. Just prepping a potential launch site sends a pointed message to Trump, who has repeatedly cited Kim’s decision to refrain from weapons tests to justify his controversial decision to engage the North Korean leader one on one.

North Korean Foreign Minister Ri Yong Ho told a rare news conference after the Hanoi talks that Kim had pledged to not to restart testing. “During this summit, we expressed intent to give commitment in a paper form that we permanently stop nuclear tests and test-launch of long-range rockets, to ease the U.S. concerns,” Ri said March 1.

Images released last week by Beyond Parallel – part of the Washington-based Center for Strategic and International Studies – showed that North Korea was rebuilding a long-range rocket site at the Sohae Launch Facility. The site was dismantled in an apparent show of goodwill after Trump’s first summit with Kim in June and the U.S. president said he would be “very disappointed” if it was being rebuilt.

A separate report showed increased activity just before the February summit at a rocket-production facility called Sanumdong in the Pyongyang area, where long-range missiles and space launch vehicles are constructed.

Town, who’s also a research fellow at the Washington-based Stimson Center, said it was too early to say what North Korea was doing based only on satellite imagery. The regime might be preparing an actual launch or going through the motions to increase its leverage, knowing that what it does is watched by U.S. spy satellites, she said.

U.S. National Security Adviser John Bolton declined to speculate about Kim’s intentions when asked about the reports Sunday, saying “we see exactly what they’re doing now.” “The leverage is on our side right now, not on North Korea’s,” Bolton said on ABC’s “This Week.”

The latest UN resolution punishing the regime for its 2017 ballistic missile test called for the suspension of any launches using ballistic-missile technology. That means even a civilian satellite launch would be a violation, said Oh Joon, a former South Korean ambassador to the UN.

“China and Russia won’t be able to say that North Korea has been abiding by the resolutions and sanctions should be eased,” Oh said.

Kim could also be prepping the launch facilities to increase their value in future talks with the U.S., said Go Myong-Hyun, a research fellow at Asan Institute for Policy Studies in Seoul. North Korea’s offer to close parts of its main nuclear research facility in Yongbyon in return for sanctions relief didn’t satisfy Trump in Hanoi.

“It is trying to change the view within the U.S. administration and outside that what North Korea’s offered was not good enough,” Go said. “North Korea’s message is that doing a deal with it and easing sanctions are the best way to stop its provocations.” Youkyung Lee, Bloomberg