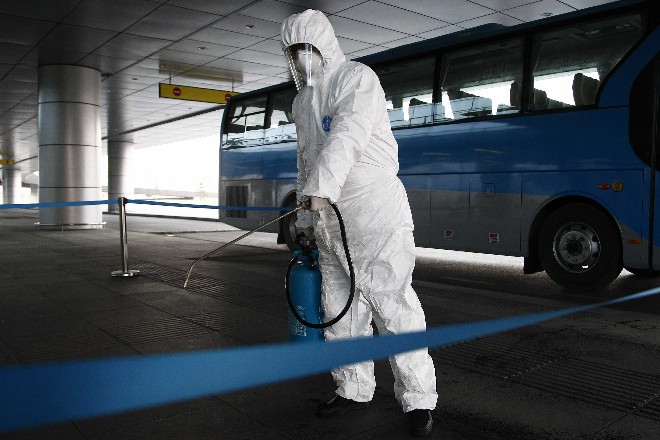 North Korea said yesterday it was mobilizing 30,000 health workers everyday in its “all-out efforts” to guard against the spread of a virus from neighboring China.
North Korea hasn’t reported any case of the new coronavirus, but some experts say an epidemic in North Korea could be dire because of its chronic lack of medical supplies and poor health care infrastructure.
Authorities were redoubling border inspections and conducting screenings and medical surveillance on those who return from overseas business trips, the North’s main Rodong Sinmun newspaper said.
It said the 30,000 workers are examining and monitoring residents and trying to inform North Korean people about how dangerous the virus is, how it spreads and what precautionary steps they should take.
The virus has killed 425 people in China and one each in Hong Kong and the Philippines. More than 20,000 cases have been confirmed, with at least 180 beyond mainland China.
North Korea shares a long, porous border with China, its last major diplomatic ally and aid benefactor. Tens of thousands of North Korean workers were believed to be working in China before a U.N. order for Beijing to send them back home expired in December. It was unknown how many of them have returned home.
The newspaper said research centers and pharmaceutical factories were working to develop and produce drugs, test kits, disinfectants and other medical supplies and government ministries were prioritizing quarantine efforts.
North Korea has also banned foreign tourists, reduced flights and suspended operations at a liaison office it has jointly run with South Korea located just north of the inter-Korean border. South Korea on Tuesday reported its 16th case of the virus.
North Korea took similar tough quarantine measures during the 2002-03 spread of SARS, which also began in China. North Korea didn’t report any SARS case there, according to the South Korean government. AP