North Korea may return to launching ICBMs, US envoy Warns 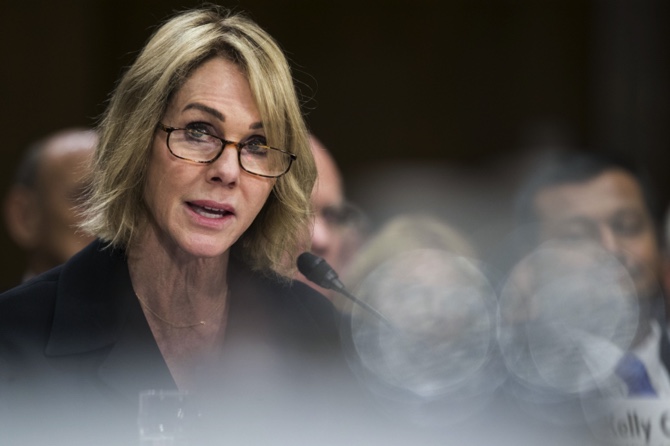 “In practical terms, this would mean that the DPRK could launch space vehicles using long-range ballistic missile technology, or that they could even test-launch intercontinental ballistic missiles, which are designed to attack the continental United States with nuclear weapons,” Craft told the United Nations Security Council on Wednesday, referring to North Korea’s formal name.

Kim’s regime has repeatedly threatened to take a “new path” in nuclear talks unless President Donald Trump makes it a more favorable offer by the end of the year. Russia and China have called for a partial easing of U.S. sanctions. Without backing off from the U.S. insistence that North Korea commit to total denuclearization first, Craft sounded a note of conciliation.

“We remain ready to take actions in parallel, and to simultaneously take concrete steps toward this agreement,” Craft said. “We are prepared to be flexible in how we approach this matter. And we recognize the need for a balanced agreement that addresses the concerns of all parties.”

North Korea’s foreign ministry issued a statement yesterday lashing out at U.S. Secretary of State Michael Pompeo and his calls for sanctions enforcement against it.

“The U.S.’s stance where they are allowed to launch intercontinental ballistic missiles at any given time, and we are not allowed to conduct any weapons tests that all other nations conduct, shows U.S.’s thief-like intentions to disarm us completely,” the ministry said, according the state-run Korean Central News Agency. “Whatever the U.S. decides, we are ready to take countermeasures to it.”

Russian envoy Vasily Nebenzya told Security Council members Wednesday that diplomacy should be a give-and-take, and that “it’s impossible to get something when you can’t offer something in return.”

Reversing some sanctions “may encourage the parties” to “go forward in the right direction and it may also create a more favorable environment,” Chinese Ambassador Zhang Jun told reporters after the meeting. “No matter what we do, it should be conducive to reducing tension, to promoting dialogue, and thus prevent from falling back into confrontation,” Zhang said, according to the official Xinhua News Agency.

Trump has held back from responding for months as North Korea carried out short-range missile tests, some in violation of the UN resolutions. But he also has revived his “Rocket Man” nickname for Kim and boasted that “we have the most powerful military we’ve ever had” and if necessary “we’ll use it.”

A return to intercontinental ballistic missile launches or nuclear tests could send U.S.-North Korea ties back to where they were in 2017, when tensions between the historic enemies surged and analysts worried about a military conflict. It would also undermine what Trump considers one of his key foreign policy achievements as he faces impeachment proceedings and heads into an election year.

While emphasizing that the U.S. hopes to keep diplomacy alive, Craft warned that “if events prove otherwise, we, this Security Council, must all be prepared to act accordingly.” David Wainer, Bloomberg