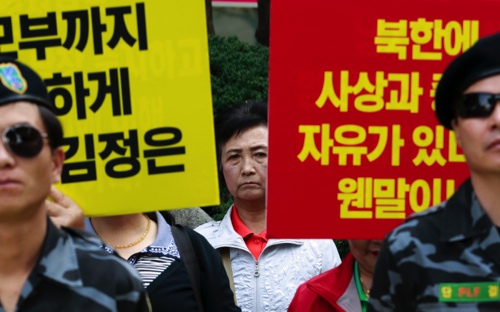 A North Korean official publicly acknowledged to the international community the existence of his country’s “reform through labor” camps yesterday, a mention that appeared to come in response to a highly critical U.N. human rights report earlier this year.
Diplomats for the reclusive, impoverished country also told reporters that a top North Korea official has visited the headquarters of the European Union and expressed interest in dialogue, with discussions on human rights expected next year.
North Korea’s deputy U.N. ambassador Ri Tong Il said the secretary of his country’s ruling Workers’ Party had visited the EU, and that “we are expecting end of this year to open political dialogue between the two sides.” The human rights dialogue would follow.
In Brussels, an EU official confirmed a recent North Korea meeting with the EU’s top human rights official, Stavros Lambrinidis, but said any dialogue currently planned is limited to rights issues.
Choe Myong Nam, a North Korean foreign ministry official in charge of U.N. affairs and human rights issues, said at a briefing with reporters that his country has no prison camps and, in practice, “no prison, things like that.”
But he briefly discussed the “reform through labor” camps. “Both in law and practice, we do have reform through labor detention camps — no, detention centers — where people are improved through their mentality and look on their wrongdoings,” he said.
Such “re-education” labor camps are for common offenders and some political prisoners, but most political prisoners are held in a harsher system of political prison camps.
The North Korean officials took several questions but did not respond to one about the health of leader Kim Jong Un, who has made no public appearances since Sept. 3 and skipped a high-profile recent event he usually attends.
The officials said they don’t oppose human rights dialogue as long as the issue isn’t used as a “tool for interference.” Their briefing seemed timed in advance of the latest resolution on North Korea and human rights that the EU and Japan put to the U.N. General Assembly every year.
The North Korean briefing concerned a lengthy human rights report it released last month in response to a U.N. commission of inquiry that concluded the authoritarian government had committed crimes against humanity. “We dare say that the case of human rights in the DPRK exceeds all others in duration, intensity and horror,” commission head Michael Kirby told the U.N. Security Council in April.
The report’s release in February put the North on the defensive. Its public acknowledgement yesterday of the reform camps, and its overture to the EU rights chief, were signs that Pyongyang now realizes the discussion of its human rights record won’t fade away, said Greg Scarlatoiu, executive director of the Washington-based Committee for Human Rights in North Korea.
He said the mention of the reform camps was the first direct acknowledgement by a North Korean official speaking before an international audience. Last month, a senior court official mentioned the reform camps’ existence in an interview with the pro-Pyongyang website Minjok Tongshin.
“While the North Korean human rights record remains abysmal, it is very important that senior North Korean officials are now speaking about human rights, and expressing even pro forma interest in dialogue,” Scarlatoiu said in an email.  Cara Anna, United Nations, AP