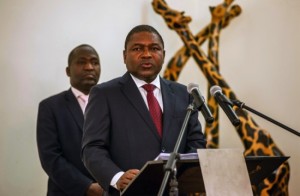 The President of Mozambique invited Indian businesspeople to invest in Mozambique, preferably through partnerships with local companies during the Mozambique/India Business Forum, Mozambican daily newspaper Notícias reported.
Nyusi gave the businesspeople assurances that his government would do everything to ensure stability and consolidate peace, through the effective exercise of democracy and respecting the values ​​of reconciliation, dialogue, tolerance and respect for difference.
“In Mozambique we can invest both in public-private partnerships and entirely private businesses, either individually or through partnerships with local businesses,” he said.
The President said Mozambique was a vast country with more than 35 million hectares of arable land and a favorable climate for production of several food and cash crops, many of which, if not almost all, are produced in India.
Later, at the end of a meeting between Nyusi and the Indian Prime Minister, Narendra Modi, it was stated that the two countries converge on the need to intensify mutual cooperation in various areas, particularly maritime safety and security, since Mozambique and India are linked by the Indian Ocean.
The President of Mozambique said that this visit to India made it possible to analyze the level of implementation of several memoranda previously signed by the two countries and streamlining their implementation.
“We analyzed business opportunities and we were given the idea that India is interested in participating in the oil and gas industry in Mozambique,” Nyusi said, noting that there was increasing need to capitalize on marine resources.
During this meeting, the Indian Prime Minister reiterated the invitation to Mozambique to take part in the III India/Africa Summit to be held next October in New Delhi, which Mozambique accepted.  MDT/Macauhub