Olympic referendum tomorrow | Shall it be ‘Taiwan’ or ‘Chinese Taipei’ 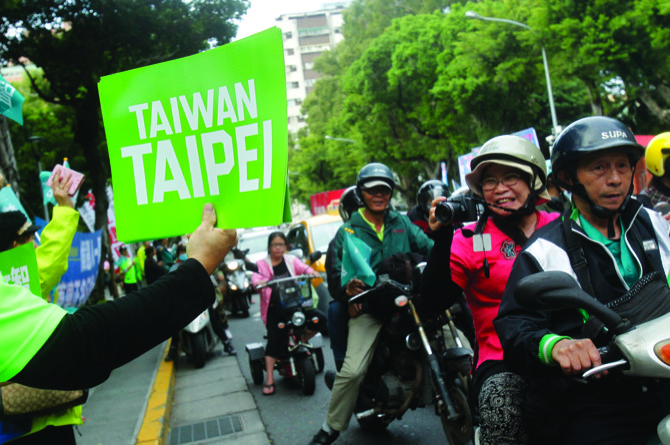 Athletes from Taiwan compete at the Olympics under the name of a make-believe country: Chinese Taipei. They march behind an imaginary national flag and, if they win a gold medal, hear an “alternate national anthem” being played.

Imagine if France or Australia had to use an assumed name at the Olympics, or the United States and Japan were banned from flying their flags.

A referendum to challenge this will be held in Taiwan tomorrow. It asks if the self-governing island should compete in international sports events — including the 2020 Tokyo Olympics — as “Taiwan” instead of “Chinese Taipei.”

No matter what voters want, nothing is likely to change.

China’s authoritarian government has viewed Taiwan as a renegade province since the two separated in the 1949 civil war. The International Olympic Committee backs China, which will host the 2022 Winter Olympics after spending USD40 billion on the 2008 Summer Olympics in Beijing.

In a statement to the Associated Press, the IOC said it will not alter a 1981 agreement that Taiwan must compete as Chinese Taipei. Its executive board repeated that stance in meetings on May 2-3.

“The agreement remains unchanged and fully applicable,” the IOC said.

That puts the Chinese Taipei Olympic Committee in a bind.

If the referendum passes, it could be required by Taiwanese law to go ahead with the name change pending approval from the legislature.

But in a statement to AP, it said “we are bound by the Olympic Charter, the agreement we signed with the IOC in 1981, and also by the IOC executive board decision.”

Taiwan’s athletes are caught in the middle. Dozens protested Wednesday, fearing they could lose their chance to participate in the Olympics.

Even if Taiwan was booted out, the IOC has frequently let athletes compete under an independent Olympic flag.

Jacqueline Yi-ting Shen, the secretary general of the Chinese Taipei Olympic Committee, declined to comment for this article. But she spoke about Taiwan’s predicament in an interview with the AP at the Asian Games in August.

“This gives us a chance to compete and make our strength known internationally, so we accept the pity that we have to compete under the name of Chinese Taipei,” Shen said.

She added: “I’m sure that many people [in Taiwan] feel dismayed. But quite a lot understand that it is the reality in the international sporting realm. If we use our own name, we will lose the chance for our athletes. They will lose the playground, or the showcase they have. The right of our athletes to compete is our utmost concern. And I think most Taiwanese understand that.”

Ma Xiaoguang, a spokesman for China’s Taiwan Affairs Office, told a news conference this month that Taiwan was using the name issue to “politicize” sports. He said the referendum would damage Taiwan’s interests but gave no details of measures Beijing might take.

Earlier, China warned that Taiwan would “swallow its own bitter fruit” over the referendum issue.