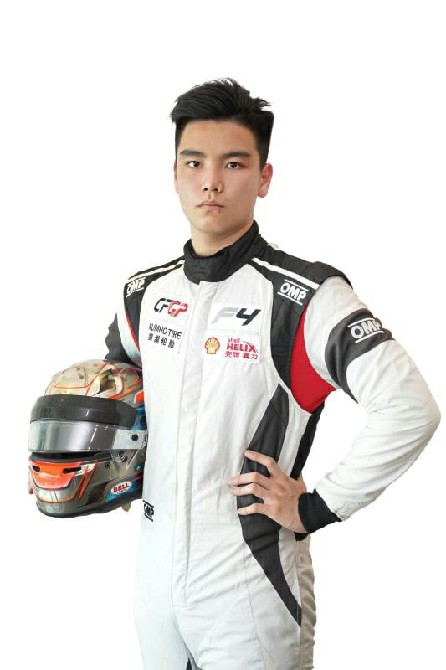 Macau race driver Charles Leong will be contesting this year’s Macau Grand Prix (GP). Already a customary participant of the Formula 3 GP, Leong will be racing the streets of Macau in a Formula 4 (F4) category car this year. It will be the first-ever running of the beginner level category of the most prestigious Asian motorsports event.
In an exclusive interview with the Times, Leong talks about his high expectations for the race and how he is preparing for the bigger and unexpected challenges presented to him in this peculiar year of 2020.

Macau Daily Times (MDT) – How is your preparation for the Macau GP going? Was it difficult to adjust back to the F4 car?
Charles Leong (CL) – The last time I drove the F4 car, I was 15 years old [4 years ago]. It is good to be back in a racecar [after not racing for almost a year], getting back to the rhythm and trying to gain my race fitness back. During the China F4 event in Zhuhai, held from October 6 to 8, I was struggling to get everything together and drive consistently, especially when transitioning between the break and the throttle. This was what I was struggling with the most at the start.
But I still managed to do a good qualifying session and the races went well. I believe I can still be faster [than I was in Zhuhai] in this car and extend the gap even more from the other drivers because I feel that I was not driving at my 100 percent as I still was not at my full race fitness. I believe there is still more that I can gain because when I looked at my old data records in that car and compared it with what I did recently, I have been losing 1 or 2 tenths of a second. It just takes some time to adjust.

MDT – You were racing in Zhuhai to prepare for the Macau GP. What do you think about this year’s event and how do you feel about F4 coming to the Guia Circuit?
CL – I think it is still pretty good that the F4 comes to Macau (at least something is happening this year). Macau is in a much better position than many other countries and regions regarding the Covid-19 pandemic. We did pretty well in controlling the Covid-19 pandemic.
I think the F4 race here will be fun. It gives a lot of opportunity to people here, especially to those who never had the chance to race in Macau, to do it this year. This can also work as good preparation and incentive for some new drivers.
The F4 car is slow [when compared with F3 cars] but it’s still kind of a hard car to drive because there isn’t any electronic assistance and it also has limited downforce [aerodynamics]. It is just like a huge Go-Kart.

MDT – Do you think you are in an advantageous position due to your experience and knowledge of the track when compared with most drivers that will be entering the Guia Circuit for the first time?
CL – If you are a good driver, I don’t think you will find a huge problem when you arrive at a new circuit. If you know the car well you just need to drive around a couple of laps to know the track, it is pretty easy.
To me and [according to] my personal experience, what is more difficult is to learn the car because you can’t have enough time inside a car, especially in the F3. After all, it requires a very high budget as it is very expensive to have track time and so it becomes impossible to clock a lot of mileage in the car.
I think most of them [F4 racers] will be fine, but maybe some of them will experience some crashes in the practice sessions.
I think the bigger challenge will be related to the lack of downforce from the car. This will be particularly clear especially in the mountain section. It’s going to be hard to drive there and it’s also very bumpy, which is another factor affecting the car in my experience.
Most of the Macau track is bumpy, so we can’t avoid that. What we can do is to try to learn and avoid some of the bumps especially at the braking points, particularly on the Lisboa [Bend]. 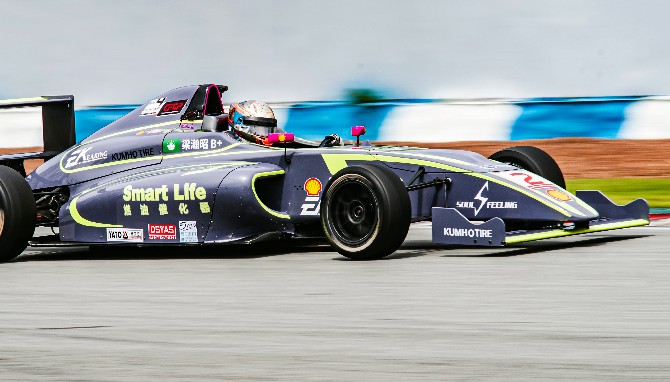 MDT – Does the size of this F4 car (much smaller than the previous F3 cars) have any influence on the competitiveness of the race?
CL – I don’t think so. The size of the car doesn’t matter as [much as] what you need to do is to get as close as possible to the wall/barriers. There isn’t a big difference coming from the car’s size that influences the way to drive them, except maybe there is a little more space for you to go for the limits of the track [while exiting from the turns].

MDT – You are most probably the top favorite to win this race. Do you agree?
CL – I’m looking forward to winning in Macau this year. I think from what I have seen from the results of F4 China races, all I need is just to have a bit of luck at the Lisboa corner, especially at the start of the race and after that, I think I can lead the race till the end.
I look at the results from the last four races in Zhuhai, which is a track that everyone knows. I was also racing against drivers that know the car well and I could still manage to create a gap from the following car while racing on old tires.
I think I’m in a pretty good shape compared to the majority of the competition.

MDT – Do you think Andy Chang will be your bigger challenger?
CL – Andy knows the track and he has been racing on F3 cars, but he has also not driven for a long time. But honestly, I don’t bother much in trying to find who my biggest challenge is. I prefer to focus on myself and on what I need to do. I know I need to calm myself and start a bit slow in practice sessions and then maybe push forward a bit and take a little risk in one or two qualifying laps, so that I can achieve a good result. I’m focused on myself only.

MDT – We know that in every race, starting at the front is very important. In Macau, is it even more decisive?
CL – Yes, especially in this race where we expect the level of the racers not to be that balanced. It will be really hard to get to the front if, for some reason, you end up in the middle of the pack.
Even if you are faster, there are not many chances to overtake and you take a serious risk of being crashed by someone with a slower race pace.

MDT – This opportunity comes unexpectedly after you were about to drop formula racing, is this correct? What are you aiming to do next?
CL – Yes, that is true. After struggling with sponsorship and not finding a budget to continue racing in formula cars last year, I had decided to stop racing and I was starting a project which aimed to help people like me who had an interest in racing but did not know how to do it.
I had my racing simulator to practice at home and I partnered with a group of people that had a big interest in e-sports at the University of Science and Technology. I provided my simulator to them so as to allow young people who have an interest in racing to try and experience racing.
If they like it and want to try the “real thing,” I can help them, taking them to the Go Kart track or do training sessions in the Mainland.
I want to see someone from Macau appear again and to continue this legacy that we have in racing.
I am probably the last young driver in Macau. I don’t see anyone else after me and I believe that it is pretty easy to find new people. If you go to these simulator places, you will find many kids that want to race but they just don’t have the money. What they need is just support.
You can also see this through the summer activities [organized by the Education and Youth Affairs Bureau together with the Sports Bureau] that include a Go-Kart activity. Youngsters get interested but then when the parents see the price for them to continue, they get shocked. This is not a sport for “normal people” and every race can cost around 30,000 patacas or more. It is just really hard for a normal family to spend that money.
The new government is also cutting costs, including racing activity subsidies, making it even harder now.
If there are any talented kids in Macau, I can bring them to the mainland to do some practice sessions because it is a lot cheaper there and there are a lot more resources.
Local regulations also don’t make it any easier for people to step into the Go-Karts. In Macau, the minimum age to drive a rental Go-Kart is 18 and no one knows how to proceed, and which steps need to be taken to be able to practice or race a Go-Kart at an earlier age.
It involves going to the Automobile General Association Macao-China (AAMC) to register and once people understand the complexity and difficulty of the procedures, they quit. It is part of human behavior.
But I do think that in Macau, there are still good people that can help and teach a lot, the same way they did with me. The resources are still here but we need some support because otherwise this sport, which is part of our local DNA and it is a tradition for us, will die. 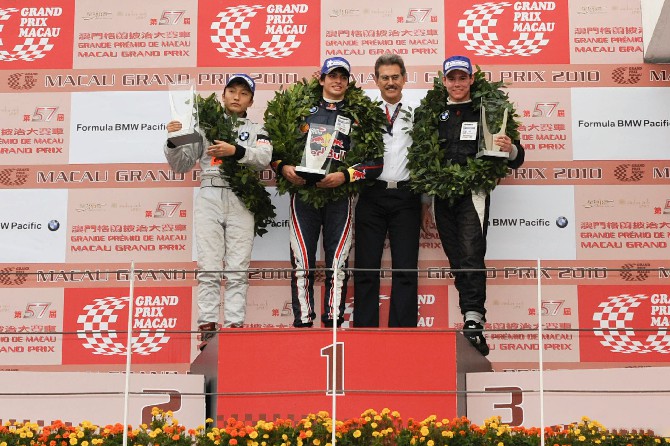 Macau has not hosted a junior formula racing event as part of its main program since 2010, when the loud Formula BMW Pacific cars, powered by the “Flying Brick” K1200RS sport-touring motorcycle engine took to the roads of Macau during the 57th Macau GP.
The race in Macau also marked the final race of the seventh and last season of the competition. The winner of the race was Spaniard Carlos Sainz Jr., who is currently racing in Formula One for McLaren but is already confirmed to be moving to Ferrari next year, replacing four-time Formula One World Champion, Sebastian Vettel.
During the 60th Macau Grand Prix in 2013, a race was held by Formula Masters China. F3 regulation cars powered by a 1.4L turbo 180bhp engine raced in the competition.
Formula Masters was one of the competitions that was involved in the first of two consecutive weekends of races, held specially in Macau that year. RM