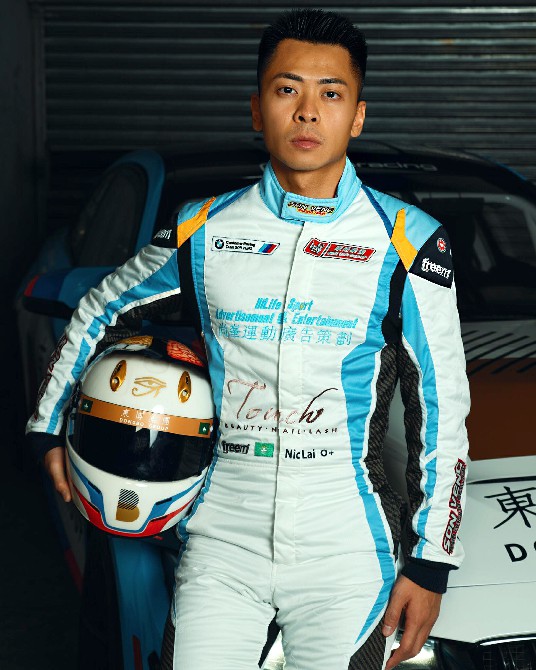 An illustrious unknown for those unfamiliar with the local motorsports’ panorama, Macau’s Nicholas Lai is set to move from the virtuality of the racing simulators to the reality of the streets of Macau this year.
Behind the wheel of a BMW M4 GT4 from the Son Veng Racing Team, Lai is living a childhood dream with the opportunity to participate in the notorious Macau Grand Prix event.
To learn more about Lai’s path in motorsports and his expectations for this year’s race, the Times spoke to him in an exclusive interview.

Macau Daily Times (MDT) – Tell us a little bit about how you started racing.
Nicholas Lai (NL) – I started race driving back in 2015 after proper training with Asia Racing Team (ART). It took me three years to build my confidence in controlling the car.
In 2018, I finally had enough confidence to move forward into racing so I joined the “Radical Challenge Series” in Shanghai. It was my first-ever race and I think I made a mistake in the last half of the last lap, where the engine stopped and I couldn’t restart the car after it stopped. I missed a place in the podium on that first race because I didn’t know how to restart the car. After all, it had some kind of “power lock” in the gear.
This happened with the Radical SR3 car. It took me over 30 seconds to restart the car and although I had some advantage over the next driver, I saw him pass through.
After that race, I decided to engage in proper physical training as I knew I wasn’t prepared for races. It took me some six months of training in a gym to reach the level of fitness I needed and at the same time, I also started to do some [racing] simulator sessions as well.
Last year, I also raced in Formula 4 (F4). It was something that I always wanted to do – to race in a formula car. I raced in Shanghai in April 2019 in one of the support races for the F1 event [F1 Chinese Grand Prix]. We only had one race that weekend and I got only 14th position so it didn’t go so well. I experienced a lot of problems with the car. It had several engine failures during both practice and qualifying sessions so I had to start from the back.
Later in 2019, I raced in Zhuhai and I managed to score some good results. I was awarded a rookie trophy; I was really happy with that as it was my first time racing in Zhuhai.
Then the championship moved to the next race in Ningbo [Zhejiang province] and I was improving a lot and could see my progress but after the Ningbo event, the car problems reappeared. I guess it was the Engine Control Unit that became wet due to the heavy rain.
I was disappointed as I had started 4th from the grid but by Turn 5, I was already leading the race but the engine died on me.
I then started thinking that maybe it was time to change again as the F4 car was not reliable. I thought it was time to move forward to something better so I joined the Asian Formula Renault (AFR) series in Sepang, Malaysia.
I found it interesting that it was not that difficult to learn the car and track as I thought it would be. In Sepang, there is a lot of gravitational force (g-forces) that results from high-speed cornering, braking, and acceleration, but since I had been physically preparing, it wasn’t that difficult.
I attained three podium finishes after that and I was thinking to join this year’s AFR series as I was interested in race in the brand-new Hanoi circuit [in Vietnam] but eventually, that race never happened [due to the Covid-19 outbreak that halted the motorsports calendar].

MDT – How did you get the opportunity to participate in this year’s Macau GP?
NL – In March this year (amid all the complications), I got an invitation from Son Veng Racing Team, asking me if I wanted to join the Macau race as they were planning to have two races on the Mainland in preparation for the Macau event.
And I thought this was my chance to race in Macau and even be able to get any kind of support from the government as I have been spending my own money for the past five years without any support.
It took me a lot of sacrifices and spending of all my savings to reach here.
I only started to join racing activities and training in 2015 because that is when I finally had the money for it. Also, I learned these skills from my job roles, where most of my duties included ‘set targets and building goals’. I did apply the same concept to myself. I have been always fascinated by the F1 and its drivers.
I need to had that fortunately and although the many difficulties I found support from Dongbo Group that is sponsoring my race this year, to which I am very thankful.

MDT – For the Macau GP, you will be racing in a completely new and different type of car. How do you feel about that change?
NL – Yes, I am both excited and a little anxious about it. I have always been racing formula cars (single-seat, open-wheel, and open-cockpit cars) and I never raced any touring cars (modified road cars). I only had a practice session in Zhuhai in an Audi RS3 TCR car and I didn’t quite like it as I felt it was very slow in the car and like driving in a shell without seeing the wheels.
I still prefer the formula cars. It’s a different experience where you can feel everything that is going on and you feel like being part of the car. In a touring car, you don’t feel a lot as all the forces are transferred to the cage [roll cage] and chassis.
One of the scariest parts of driving in Macau and especially with a touring car is that if you don’t drive carefully, it is very easy to ‘total’ the car [destroy completely]. This is what makes me more nervous and anxious about.

MDT – What are your expectations for the Macau GT Cup race event, in which you are participating?
NL – This is a very unusual year for everyone and as we speak it’s not even possible to know or even forecast who is going to participate in this race as [at the time of the interview] the entry list has not yet been published.
There were a lot of changes and I was initially to race in the Greater Bay Area GT Cup, but then finally we decided to change my entry to the Macau GT Cup.
Since there were no qualification races this year, it is impossible to know who will be racing and in which car.
I only had a very short session to try out the car and the next time I’ll be jumping in the M4 GT4 will be to race in Macau.
MDT – How are you coping with the lack of opportunities to practice and gain routines? Are you using simulators to practice?
NL – What I am doing to prepare for the race is mostly to build up my [physical and psychological] strength.
The simulator is important but I don’t practice on the simulator every day because, in my opinion, if you get too attached to the simulator and use it every day, you soon start treating it as a game. But, if you try to use it like once a week, this will be just like your real practice session.
I don’t focus so much on the race simulator; I prefer to focus more on the physical training as we know many older racers in Macau do not usually focus on the physical part of the training but they know the track quite well as they have been racing here for many years.
I think I can compensate my lack of track experience with better physical preparation as I feel that physical preparation plays a very important role.

MDT – Do you agree with the introduction of more junior or support races to Macau GP?
NL – I think so. Macau GP should accommodate people like myself. It is not easy to get to [race] in Macau because you need to spend a lot of money. Unless you come from a rich family [that can support you], which I am certainly not.
I think if there is such support especially for the youngsters, so that they can focus just on one thing, which is racing and practicing for the sport itself.
It takes a lot of strength to get to the position of being able to race in Macau.
Then, if you can’t race in Macau, you are barred from applying for support from the government. Current regulations state that for racers to get a subsidy from the government, they must participate in the local racing event and should be included in the final classification list
I hope that the government and the sport entities will find a way to encourage new drivers to get more exposure and support in Macau as this is our race and our track, we somehow have the duty to promote it.

Thursday:
F4 – The first step into the limelight