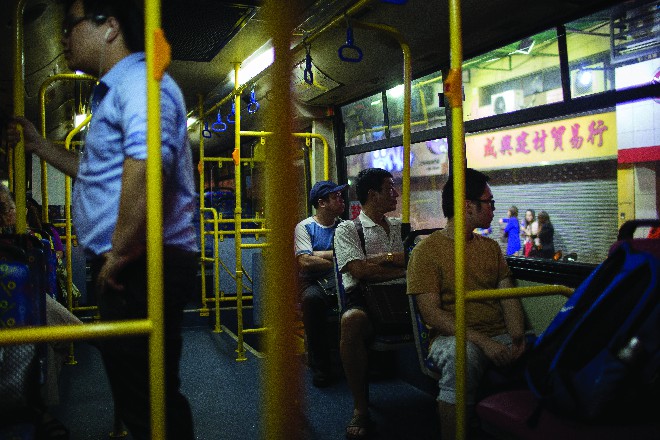 The Macau SAR government is preparing to sign a new contract with Macau’s bus companies by September. The government will pay one billion patacas in subsidies to the two bus companies in return for six years of service.
Yesterday, Secretary for Transport and Public Works Raimundo Arrais do Rosário and Director of the Transport Bureau (DSAT) Lam Hin San met with members of the Legislative Assembly (AL) Follow-up Committee on Land and Public Concession Affairs to answer questions regarding the bus contract.
On the sidelines of the meeting, Rosário and Lam provided the media with some insights into the contract.
The future bus contract is expected to be signed before October. It will be a six-year contract with the two bus companies currently operating in Macau. The former bus contract covered a ten-year period.
Given that Macau may have more public transportation options within the next six years, such as further lines of Light Rapid Transit, the local government believes it is more appropriate to shorten the contract to six years rather than entering into another ten-year relationship with the bus companies.
The new contract will include a fixed amount of government financial support for the companies of approximately 1.04 billion patacas. Of that total, 304 million patacas will be used to subsidize the fares of senior passengers, passengers with disabilities and student passengers. The remaining amount of approximately 300 million patacas will subsidize the use of the service by other passengers.
The 304 million patacas subsidy is subject to adjustments every year as the numbers of these categories of passengers may differ each year.
The remaining 600 million patacas of the yearly subsidy will be fixed during the first three years. In the third year of the contract, the bus companies will be able to apply to the government to alter the size of this subsidy. The government makes no promises to increase this specific portion of the subsidy. Should the government approve any changes to this 600 million patacas subsidy, the adjusted amount will only come into effect starting from the fourth year of the contract.
Each year, the local government will assess the bus services. Based on the assessment, the authority will decide whether or not to reduce the 600 million patacas subsidy. The criteria for this assessment include basic bus frequencies, the number of passengers, and other key data.
The bus companies will be allowed to carry out other collateral services such as advertising, or renting buses to other businesses. However, the companies must make such vehicles distinguishable from normally operating buses, with regard to the nature of its business. For example, a bus rented out for other services should be a different color to the vehicles used for transporting the general public. Drivers should also exclusively operate one type of bus, driving either public buses or operating vehicles leased to other business.
Companies may use their vehicles to make a profit from advertisement, but the advertisements must be pre-approved by the government.
Bus companies will be obliged to return business profits to the government. The amount of profit to be returned will be calculated based on a specific and currently undisclosed percentage of their pre-tax profit. As per the previous contract, this share is likely to be around 10%.
In addition, bus companies will be eligible to ask government for plots of land to use for vehicle maintenance, parking and other purposes. Bus companies may build facilities on such land. The plots of land will be provided to the companies for free.
The SAR government also has environmental protection requirements for the bus companies. In the contract, it is suggested that at least 50% of the large buses used for routes that do not need to cross the bridges should be composed of environmentally-friendly vehicles, with a 2022 deadline to reach this percentage. By 2024, all large buses operating on routes that do not cross bridges must be environmentally-friendly vehicles.
According to Ella Lei, chairman of the AL Follow-up Committee on Land and Public Concession Affairs, when the fourth Macau-Taipa bridge is ready, the local government expects to use these environmentally friendly vehicles for crossing between the islands and the peninsula.
Each year, bus companies will be able to apply to adjust bus fares.
The contract does not mention training for workers, nor employment disputes. The local government hopes that the new contract will be helpful in encouraging the two companies to compete with each other.