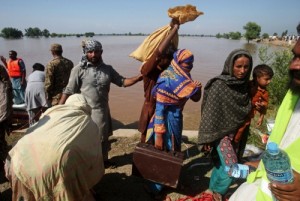 Pakistani villagers who have been affected by the flood arrive to find safe shelter in Pindi Bhatian, 105 km northeast of Lahore

The death toll from floods in Pakistan and India reached 400 yesterday as armies in both countries scrambled to help the victims and authorities in Islamabad warned of more flooding in the days ahead.
The flash floods, which began on Sept. 3, have put more than half a million people in peril and rendered thousands homeless in the two neighboring states.
Pakistani and Indian troops have been using boats and helicopters to drop food supplies for stranded families and evacuate victims.
The floods have also triggered landslides in both sections of the divided Kashmir region, split between the two arch-rivals, and caused much devastation in northern and eastern Pakistan.
The rains washed away houses, bridges, communication equipment and crops. Pakistani and Indian troops have evacuated more than 40,000 people to safer places, according to the statements from Indian and Pakistani armies.
Yesterday, thousands awaited rescue teams and searched for missing loved ones.
On a road near the village of Jamia Abad in the eastern Pakistani district of Jhang, 41-year-old Naseem Akhtar said she had gone from one government office to another, trying to get someone to help her husband and other family members who had stayed back in their village, now submerged.
Last time she talked to him over the cell phone was on Monday night, when he told her that they were sitting on the roof waiting to be rescued, she said.
“I went to the police, I tried to find a private boat, but nothing, there is no help,” she said, adding she had been on the road for two days after taking her three children to a safer place.
So far, 205 have died in Pakistan while 200 perished in India, while nearly 700 people have been injured, officials said.
According to Ahmad Kamal, spokesman for Pakistan’s National Disaster Management Authority, the floods were now moving toward Pakistan’s south. Evacuations were already under way in several southern districts which could soon be inundated, said Kamal. K.M. Chaudhry, Jhang, AP