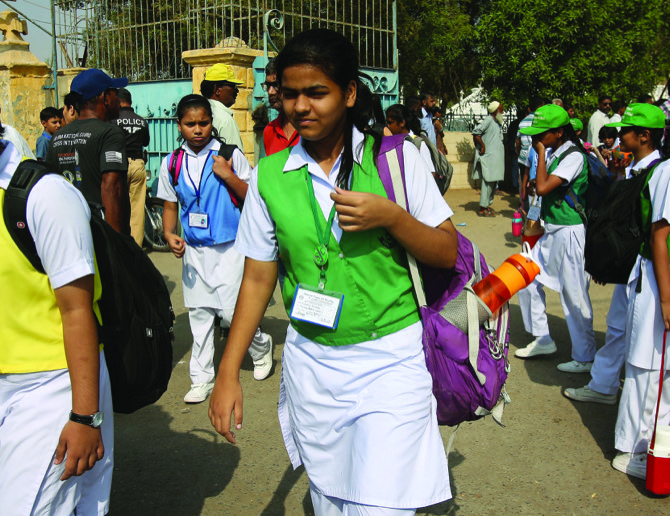 Millions of girls in Pakistan are still out of school, mostly because the government spends less money on education, a leading international rights group said yesterday — a dire warning that follows Prime Minister Imran Khan’s promises to offer education to all children.

With a population of about 207 million, including an estimated 80 million school-age children, Pakistan has nearly 22.5 million children out of school, the majority of them girls, according to a new report released by Human Rights Watch.

Pakistani girls are deprived of education for multiple reasons, including a shortage of government schools, the New York-based watchdog said in the 111-page report, entitled “Shall I Feed My Daughter, or Educate Her?: Barriers to Girls’ Education in Pakistan.”

The Pakistani government’s “failure to educate children is having a devastating impact on millions of girls,” said Liesl Gerntholtz, women’s rights director at HRW.

For the report, HRW said it interviewed 209 people — including many girls who never attended school or were unable to complete their education and their families — in all four provinces in the country.

Human Rights Watch said that along with the government’s under-investment in schools, overall lack of schools and prohibitive school fees and related costs, issues such as corporal punishment and a failure to enforce compulsory education are also contributing factors.

Pakistan spent less than 2.8 percent of its GDP on education — far below recommended standards of 4 to 6 percent — in 2017, the rights group said.

New Prime Minister Khan, who has pledged that no child will remain out of school, has assigned Education Minister Shafqat Mahmood to reform the education system.

“Our main focus will be to bring the 25 million out-of- school children back to schools,” Mahmood said, adding that the government would soon announce a new education policy.

HRW’s report made no mention of security concerns, and though it is generally safe for girls to go to schools these days in Pakistan, dozens of schools for girls have come under attacks by militants in recent years.

In April, 11 girls’ schools were torched in northern Pakistan. The attack angered Pakistan’s Malala Yousafzai, the young Nobel laureate and champion of girls’ education worldwide, who demanded the schools be promptly rebuilt.

Yousafzai, 21, had also campaigned to promote education for women in the northwestern Swat Valley where she was shot and wounded by the Pakistani Taliban in 2012. She survived the horrific attack became the youngest person to be awarded the Nobel Peace Prize in 2014.

Yousafzai, who has been living in Britain since her attack, visited her hometown in March 2017. Her Malala Fund has invested, she said at the time, a total of $6 million for schools and to provide books and uniforms for schoolchildren in Pakistan. AP