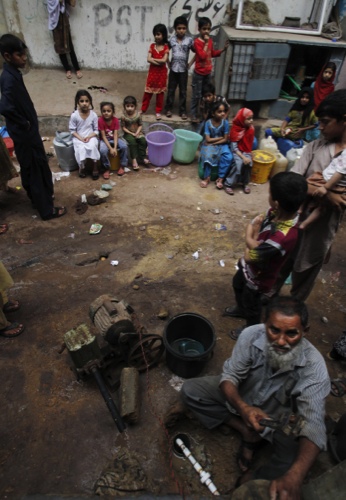 Pakistani children gather by a water distribution point, hoping for the water to come back after being cut, in Karachi, Pakistan

On the outskirts of the slums of Pakistan’s biggest city, protesters burning tires and throwing stones have what sounds like a simple demand: They want water at least once a week.
But that’s anything but in Karachi, where people go days without getting water from city trucks, sometimes forcing them to use groundwater contaminated with salt. A recent drought has only made the problem worse. And as the city of roughly 18 million people rapidly grows, the water shortages are only expected to get worse.
“During the last three months they haven’t supplied a single drop of water in my neighborhood,” protester Yasmeen Islam said. “It doesn’t make us happy to come on the roads to protest but we have no choice anymore.”
Karachi gets most of its water from the Indus River — about 550 million gallons per day — and another 100 million gallons from the Hub Dam that is supplied by water from neighboring Baluchistan province. But in recent years, drought has hurt the city’s supply.
Misbah Fareed, a senior official with the Karachi Water and Sewerage Board that runs the city’s water supplies, said that only meets about half the city’s needs — 1.2 billion gallons a day.
Karachi’s water distribution network has exacerbated the problem by forcing much of the city to get its water through tankers instead of directly from pipes. The Karachi Water and Sewerage Board operates 12 water hydrants around the city where tankers fill up and then distribute. Even people in the richest areas of the city get their water through tankers that come a few times a week to fill up underground cisterns.
But criminals have illegally tapped into the city’s water pipes and set up their own distribution points where they siphon off water and sell it.
“I personally know some people previously associated with drug mafias who now switched to the water tanker business,” Fareed said. “Just imagine how lucrative the business is.”
Other areas of Pakistan pump massive amounts of groundwater. But in the coastal city of Karachi, the underground water is too salty to drink. Many people have pumps but they use the water for things such as showering or washing clothes.
The water shortage is exacerbated by Karachi’s massive population.
The city is trying to increase the amount of water it gets from the Indus River by building another canal — dubbed the K4 project. But even if they were to get political approval from the capital to take more water from the river, it would take a minimum of four years to build.
But analysts say supply isn’t the only problem. Farhan Anwar, who runs an organization called Sustainable Initiatives in Karachi, said the Karachi Water and Sewerage Board is horribly overstaffed and many of those are political appointees. The cost for water is also very low and the agency doesn’t collect all that it’s due, Anwar said. That’s made it difficult to upgrade the aging pipes the system does have, meaning contamination and leakages are common.
Meanwhile, Karachi residents have to spend more money or walk further and further to get water. One elderly resident Aisha Saleem said in recent months even the little water they get from the water board is salty.
“Women and kids have to go miles by foot and carry drinking water every day,” she said. AP