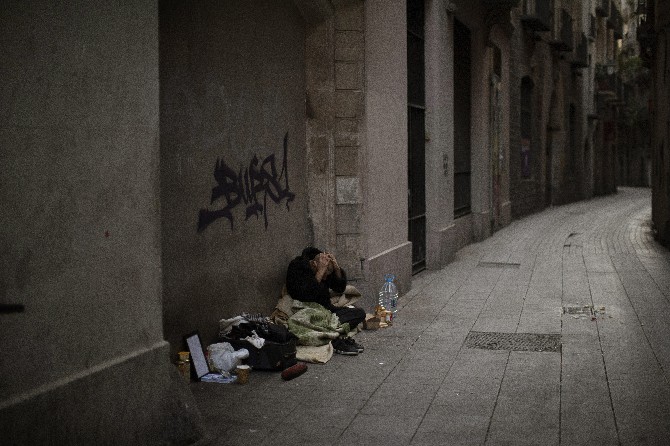 The death toll in Spain from the coronavirus shot up by more than 700 yesterday, surpassing China and is now second only to Italy as the pandemic spread rapidly in Europe, with even Britain’s Prince Charles testing positive for the virus.
In India, the world’s largest democracy, the government put its 1.3 billion people on lockdown, while U.S. lawmakers finally agreed on a massive $2 trillion domestic aid package, which buoyed stock markets around the world.
Spain recorded a record daily increase of 738 deaths, pushing it to 3,434 overall and past China’s 3,285, the Ministry of Health said. The country’s infections rose by 20% to 47,610, and more than 5,000 have recovered.
In usually bustling Barcelona, people walking around with blankets, mattresses or tents punctuated the eerie emptiness. Spain’s homeless told The Associated Press they feel more abandoned than ever as everyone else hunkers down at home.
“It is as if there has been a nuclear explosion and (people) are all sheltering in the bunker. Only us, the homeless, are left outside,” said 36-year-old Gana, who uses only one name.
Spain’s health system is overwhelmed, and with hotels being converted into hospitals and a Madrid ice rink being used as a temporary morgue. Lawmakers were set to extend the country’s lockdown for two more weeks, to April 12.
Charles, the 71-year-old heir to the British throne, is showing mild symptoms of COVID-19 and is self-isolating at a royal estate in Scotland, his office said, adding that his wife, Camilla, has tested negative.
Charles “has been displaying mild symptoms but otherwise remains in good health and has been working from home throughout the last few days as usual,” it said.
India, where the massive lockdown is underway, has only about 450 cases due to limited testing, but Prime Minister Narendra Modi warned that if he didn’t act now, it could set the country back decades.
His unprecedented move is aimed at keeping the virus from overwhelming its fragile health care system, as it has done in parts of Europe and threatens to do in U.S. hotspots like New York. Everything but essential services like supermarkets were closed. Normally busy railway stations in New Delhi were deserted and streets were eerily silent.
“Delhi looks like a ghost town,” said Nishank Gupta, a lawyer. “I have never seen the city so quiet before.”
Italy has been the hardest-hit nation in Europe with more than 69,000 infections and 6,800 deaths. Authorities are investigating if a hotly contested Champions League soccer game in Milan in February poured rocket fuel on the crisis that is overwhelming Italian hospitals. Italian doctors are being forced to choose who will receive desperately needed ventilators and who won’t.
Germany’s parliament was set to approve later in the day a series of measures that will allow the government to offer aid totaling more than 1 trillion euros ($1.1 trillion)for the country of 83 million people.
In the United States, infections were climbing rapidly and had passed the 55,000 mark, with deaths at more than 800. Top White House aide Eric Ueland announced the massive economic agreement in a Capitol hallway shortly after midnight after days of haggling.
Relief that U.S. politicians have reached a deal on economic support pushed world stock markets up yesterday. Indexes in Europe and Asia rose a day after the Dow Jones Industrial Average had its best day since 1933.
With Americans’ lives and livelihoods hanging in the balance, President Donald Trump said he “would love to have the country opened up and just raring to go by Easter,” on April 12. But that statement sharply contradicted health officials’ calls for stricter restrictions on public interactions. Scientists and other politicians in the U.S. have warned that the worst is yet to come.
New York Gov. Andrew Cuomo said his state’s infections are doubling every three days, threatening to swamp the city’s intensive care units much quicker than experts had expected. The state has 26,000 infections and more than 200 deaths.
“One of the forecasters said to me: ‘We were looking at a freight train coming across the country,’” the governor said. “We’re now looking at a bullet train.”
More than 428,000 people worldwide have been infected by the virus and more than 19,000 have died, according to Johns Hopkins University. Overall, more than 109,000 have recovered.
Russia’s prime minister ordered provincial governors to move more quickly to ready hospital beds for patients as the outbreak spreads across the vast country.
In New Zealand, the government declared an emergency before an unprecedented lockdown began.
“I have one simple message for New Zealanders today as we head into the next four weeks: Stay at home,” Prime Minister Jacinda Ardern said. “It will break the chain of transmission and it will save lives.” AP