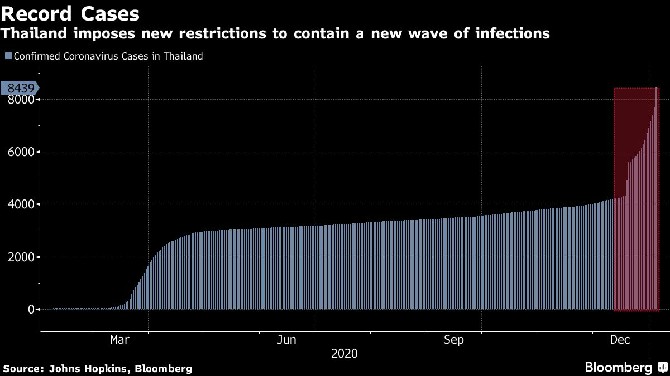 Thailand reported 745 new coronavirus cases yesterday as a surge in infections prompted authorities to impose fresh curbs in some of the most-populous regions including capital Bangkok.
The latest tally, which included 729 local transmissions, took the nation’s total caseload to 8,439, according to the Center for Covid-19 Situation Administration. More than 4,000 of those infections have been reported since the middle of December, when the new virus cluster was first detected among migrant workers, official data show. Total fatalities rose to 65 with the death of a 56-year-old man in Bangkok with underlying diseases.
The new wave of infections in Thailand, which was relatively successful in containing the pathogen after becoming the first country outside China to report the deadly virus, has prompted authorities to close schools and temporarily shut some businesses including gyms, spas, pubs and bars in 28 provinces identified as high-risk areas. The rapid rise in cases weighed on the nation’s stocks with the benchmark index tumbling as much as 1.7% before rebounding to close 1.3% higher.
Prime Minister Prayuth Chan-Ocha, who has held off on a national lockdown, said yesterday the new measures will curb the spread of the virus, and the government may consider some steps to support the economy and businesses in the near term. Relief-measures may include an extension of the domestic travel subsidy and co-spending program, government spokesman Anucha Burapachaisri said.
Southeast Asia’s second-biggest economy is expected to deteriorate further this year amid the resurgence in cases, according to a survey by Bangkok-based National Institute of Development Administration. The impact of Covid-19 may be even more deadly than in 2020, according to 48.1% of the 1,326 respondents in the survey held between Dec. 24-25.
A meeting of the Center for Covid-19 Situation Administration panel chaired by Prayuth approved the extension of a national state of emergency until Feb. 28 to contain the outbreak, spokesman Taweesilp Witsanuyotin said. The current state of emergency is set to expire on Jan. 15.
Once the order has been approved by the cabinet today, it would be the ninth extension since the initial order in March. The emergency rules allow the government to enforce mandatory quarantines and streamline disease-control plans without multiple approvals from various agencies. MDT/Bloomberg 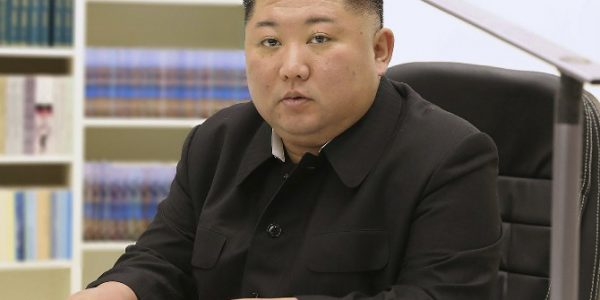