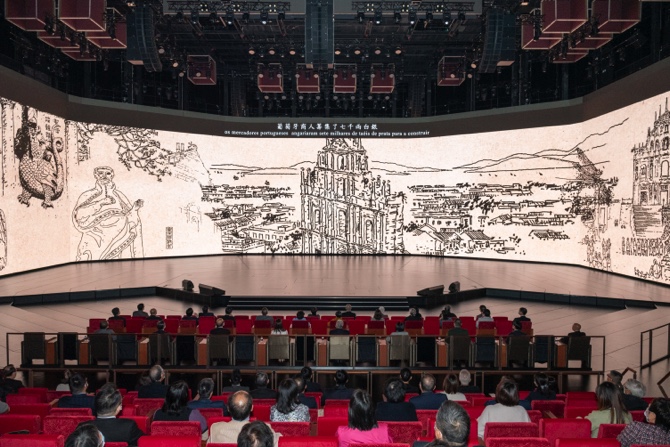 A film celebrating the 500 known years of Macau has been completed and was screened for the first time yesterday.

Although the film was completed in September last year, the curation of drawings is ongoing. According to Lok, he first began drawing the 100-meter-long artwork in 2014, after celebrating the 15th day of the Lunar New Year, dubbed Chinese Valentine’s Day.

He completed the artwork at the end of September that year, “right before the National Day” as he put it.

The curation was not triggered by this film, but by a documentary series curated by a crew in mainland China who wanted to present Macau’s history to the vast audience in the country.

Each component drawing measures one meter and is connected as a cluster, each 10 meters. The idea of transforming it into a film started to incubate as Lok finished the artwork.

Lok revealed that given the film revisited events taking place as early as the 1600s, it was particularly difficult to obtain sufficient details to inform both his drawings and the film.

Many details have been lost and become less reliable with time, so decisions on what to include in the curation were indeed challenging. Lok explained that the contents of the film were the result of a collective decision made by the crew.

Audiences can marvel at the enthralling visual effect of the 900-square-meter ultra-HD LED screen at MGM Theater. The film, enriched by compendious narration and original background music, will enlighten audiences with its artistic appeal and gripping depictions of Macau’s history.

The film will be on view at MGM Theater from January 23 to the end of 2022. Tickets can be reserved on the MGM website.