Pereira Coutinho declines to comment on disqualification of AL candidates 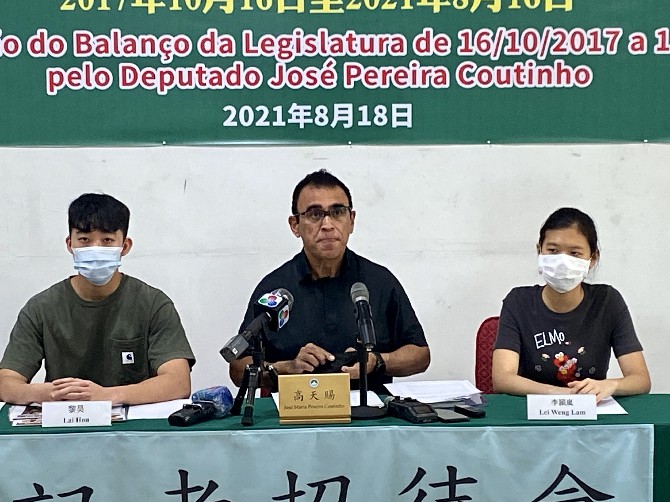 Candidate for the Legislative Assembly (AL) 2021 elections, José Pereira Coutinho, has refused to comment on the disqualification of a significant number of candidates from the pro-democracy wing.
Questioned on the subject at a press conference organized by the candidate to present a summary of the work of the AL’s sixth term yesterday, the candidate refused to comment on the matter. “The Court of Final Appeal (TUI) has already [made] a ruling on that matter and this decision is already final so I do not have anything to add besides what was said by the TUI,” he said, adding, “the only thing I can do is to respect and to follow scrupulously the Basic Law.”
Also questioned on how this decision might affect the upcoming AL term, Pereira Coutinho briefly responded that any changes will depend on the new AL composition after the September 12 elections.
“Regarding the AL, it will change or not, depending on the future composition of the AL,” he said.
“On my side I feel that I did my duty over the past four years and I want to take this opportunity to thank all citizens who have supported us, providing us with information and even criticizing us so we could keep improving our work,” he added.
After several journalists pressed him for answers, he finally admitted that is likely that “the work of overseeing [the government] done by AL will be weakened [without the lawmakers].”
He also added that he would not speculate on how he avoided the disqualification of almost the entire pro-democracy wing, stating, “I cannot judge my own case, so it is best if you seek answers from the Legislative Assembly Electoral Affairs Commission (CAEAL),” he replied to questions from the media.
Questioned how he rates the work of the disqualified candidates, specifically Sulu Sou and Ng Kuok Cheong in the AL’s last term, Pereira Coutinho again refused to comment, stating only, “I am not qualified to evaluate the work of my colleagues, I can only evaluate a little what I do in my own conscience. However, one thing is certain: I would never do anything against my moral conscience.”