Person of the Year | Jorge Menezes: Lawyer by conviction 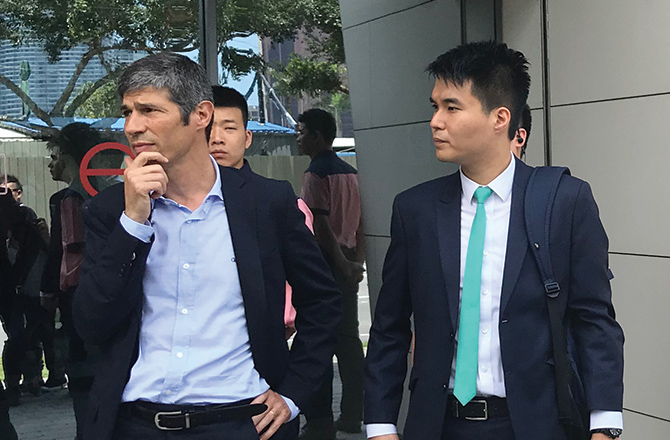 Some stories start at the beginning. In early January, lawyer Jorge Menezes accepted the call to defend Sulu Sou in court weeks after he participated in a demonstration of support for the young lawmaker on the eve of the vote suspending him from the Legislative Assembly. At that occasion, it became crystal clear that Menezes would be defending the pro-democracy activist for nothing but conviction: “I am here [at the rally] because I fully support the lawmaker’s cause.”

It was a full year for Menezes at the bar.

The task at hand was to represent Sulu Sou against the Public Prosecutor from an accusation of aggravated disobedience – see related article on these pages – a petty offense that, according to Menezes, “wouldn’t even warrant a trial.”

Those words sum up his strategy at the Court of First Instance, along with fellow lawyer Pedro Leal who would join the defense of activist Scott Chiang, a co-defendant in the same lawsuit.

Jorge Menezes and Pedro Leal exposed the ridiculousness of the accusation, asking for a non-guilty verdict. In the end, both Sou and Chiang were found guilty and sentenced to fines – in what was largely seen as a ‘face-saving’ verdict for the public powers and a victory for the defense, because it served Sou as well.

Menezes’ greatest achievement this year wasn’t the case in the lower court per se. It was the incendiary actions against the AL filed to the Court of Second Instance, in which abrasive and solid arguments ignited a public discussion that reverberated through Macau’s community like a thunderstorm.

“The President of the AL violated a subjective fundamental, sacred right of the Public Law, and was inconsiderate of the public interest of the citizens represented [by Sou]… in the House where those rights should be upheld,” the civil action states for posterity.

The discussion on the syndication of “political acts” was, therefore, put on the public agenda, making it difficult for the established powers to ever decide against the rule of law.

It was that courageous “David vs Goliath” struggle that changed the course of history and prevented the ultimate goal of Ho Iat Seng and most of his peers from being reached: to expel an inconvenient voice from the AL.

Menezes’ appeal ended up at the highest court, which decided not to consider it further because “it had lost efficacy” the day Sou was back in the parliament doing the job he was elected for.