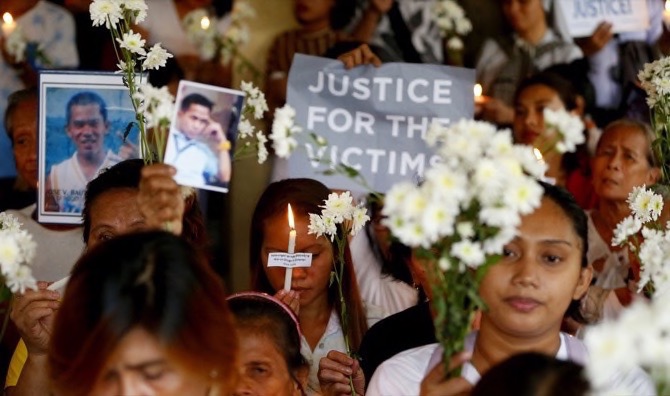 The Philippine Commission on Human Rights yesterday condemned the killing of a 3-year-old girl in a police raid in which her father, a drug suspect, was gunned down along with another civilian and a police officer.

Commission spokeswoman Jacqueline Ann De Guia said the agency was investigating the death of Myka Ulpina in a gunbattle sparked by an undercover police raid Sunday in Rodriguez town in Rizal province, east of Manila. Officials have relieved 20 police officers amid the investigation.

“Myka Ulpina’s life was cut short in the hands of those who swore to protect it,” the commission said in a statement, stressing that it “condemns the death of another innocent life as a consequence of the government’s war against illegal drugs.”

More than 6,600 suspects, mostly petty drug dealers and users, have been killed since President Rodrigo Duterte took office in mid-2016 and expanded a brutal anti-drug campaign he started when he was a southern city mayor.

Despite international condemnation and two complaints for alleged mass murder filed before the International Criminal Court, Duterte has warned that the drug war will become more dangerous in the final three years of his presidency. He said he was ready to go to jail as a consequence of the bloody campaign.

Police said the drug suspect, Renato Dolorfina, grew suspicious of an undercover police officer who was buying prohibited drugs from him. He got a gun from his house and shot the officer, sparking a firefight which left Dolorfina, his daughter, his companion and the officer dead.

News reports, however, quoted Dolorfina’s wife as denying the police report and saying they were sleeping when police barged into their house and opened fire.

National police chief Gen. Oscar Albayalde said he ordered the relief of 20 Rodriguez town policemen, including their chief, and had them surrender their firearms for ballistic tests to determine who fired the bullet that hit the child.

Albayalde said the suspect should have surrendered peacefully to keep his daughter away from harm and cited initial reports that Dolorfina may have used her as a human shield during the exchange of fire. The slain officer, Senior Master Sgt. Conrad Cabigao, left two children, he said.

The Commission on Human Rights said it supports efforts to end the drug menace in the country “but we continue to echo the sentiment that the end does not justify the means.”

“Minors caught in the crossfire of the government’s initiative in combatting illegal drugs in the country are simply not collateral damages. They are victims. Their hopes and dreams fall short once bullets enter their bodies,” said the commission, which Duterte has repeatedly denounced along with U.N. human rights rapporteurs for raising alarm over his anti-drug campaign. JIM GOMEZ, MANILA, AP