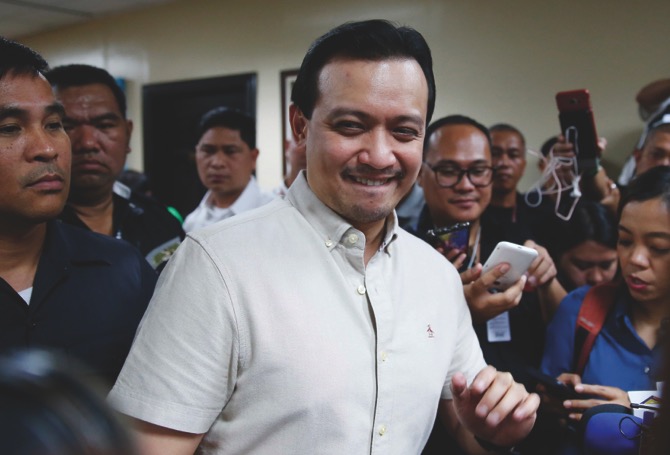 A Philippine court yesterday rejected a petition by President Rodrigo Duterte’s administration to have his fiercest critic in the Senate arrested, in a legal setback for Duterte that the senator called a victory for democracy.

Regional Trial Court Judge Andres Bartolome Soriano denied the government’s petition to have opposition Sen. Antonio Trillanes IV arrested after Duterte voided his 2011 amnesty for his role in past mutinies as a former navy officer. Soriano debunked Duterte’s premise that Trillanes never formally applied for amnesty and acknowledged guilt for his role in the failed coup attempts.

“The rule of law won and democracy won,” a beaming Trillanes told a news conference at the Senate, adding that he was prepared to be arrested.

Justice Secretary Menardo Guevarra, however, suggested the government would appeal and added that Soriano did not declare Duterte’s signed order that voided Trillanes’ amnesty unconstitutional.

“Nobody has to claim total victory,” Guevarra said. “This is not the end of it.”

Last month, another court upheld Duterte’s petition and ordered Trillanes arrested for a similar rebellion charge on which he was allowed to post bail. That contradicted the ruling by Soriano, who handled a separate, nonbailable coup charge against Trillanes.

Known for expletives-laced outbursts against his critics and political rivals, Duterte has long expressed anger against Trillanes, who has accused him of large-scale corruption, involvement in illegal drugs and extrajudicial killings in an anti-drug crackdown that has left nearly 5,000 suspects dead since he took office in 2016. Duterte has denied the allegations.

Trillanes, 47, was jailed for more than seven years for involvement in at least three military uprisings, including a 2003 mutiny against then-President Gloria Macapagal Arroyo when he and other young officers rigged part of a shopping center in the Makati financial district with bombs and took over an upscale residential building.

After being amnestied under Duterte’s predecessor, Benigno Aquino III, Trillanes successfully petitioned the two Philippine courts to dismiss rebellion and coup cases, allowing him to later run for a Senate seat. Critics say Duterte’s move violates the constitutional guarantee against “double jeopardy,” or holding a person to answer twice for the same offense.

Duterte said he voided Trillanes’ amnesty because the senator had failed to file a formal amnesty request and acknowledge guilt. Trillanes strongly denied the president’s claims and provided news reports and defense department documents to counter them.

The Department of Justice has asked two courts to issue warrants for Trillanes’ arrest and resume criminal proceedings against him. One of the courts backed Duterte’s bid last month and issued the arrest warrant for a bailable rebellion charge. Soriano, however, ruled differently, saying in his 33-page decision, “Well established is the doctrine that a final and executory judgment shall be immutable.”

Aside from the rebellion and coup-related charges in the two courts, Duterte has also ordered the military to resume a separate inquiry into the senator’s role in past mutinies.

It was not immediately clear what the military would do with Duterte’s order, but early this month, the military chief, Gen. Carlito Galvez, told a defense budget hearing at the Senate that Trillanes formally applied for amnesty based on an amnesty officer’s account, contradicting the reason given by Duterte for revoking the senator’s amnesty.

Human Rights Watch has said the attempt to jail Trillanes “is part of the persecution of critics of the Duterte administration, the latest in the relentless campaign to silence those who dared to challenge the president’s murderous ‘drug war.’”

Under Duterte, another opposition senator has been jailed on illegal drug charges, a Supreme Court chief justice has been ousted by fellow judges and foreign critics, including an Australian nun, have been barred from entering the Philippines or threatened with deportation. Jim Gomez, Manila, AP