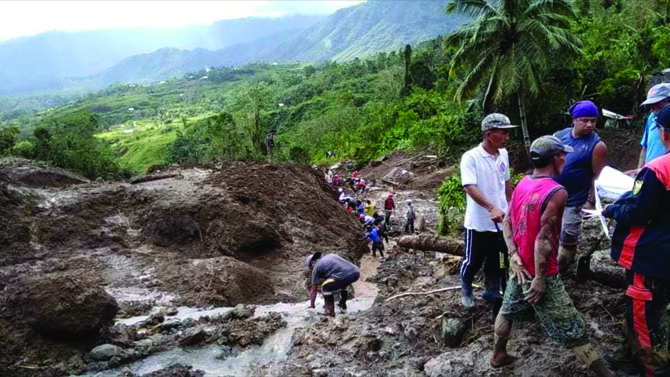 Rescuers have pulled out four survivors and three bodies but several more were missing after a massive landslide set off by a typhoon crashed down on two government buildings in a northern Philippine mountain province, officials said yesterday.

Regional police Chief Superintendent Rolando Nana said at least 18 more people still are missing from the landslide in the far-flung town of Natonin in Mountain province. Smaller land- and rockslides on roads leading to Natonin have slowed the advance of more rescuers and earth-moving equipment.

Disaster response officer Jennifer Pangket said there could be up to 24 people still trapped in the landslide, which occurred as Typhoon Yutu pummeled the region Tuesday. At least nine people have died due to the typhoon, which blew out of the northern Philippines.

“It’s a massive landslide and boulders also came rolling down from the mountain. The buildings got demolished and entombed. They’re gone,” government engineer Junel Emengga told The Associated Press by phone from the site of the landslide.

More than 100 workers, police, firefighters and volunteers were scrambling to find more survivors in the avalanche using shovels and their hands because earth-moving equipment could not go through roads blocked by smaller landslides, he said.

One new building was being constructed and an old one was being expanded, he said.

Emengga said he and other staffers of the Department of Public Works and Highways did not work at the four-story buildings because of the typhoon but other workers from a private company continued to work. Nearby residents also sought shelter in the buildings when their homes were hit by the landslides and fierce wind, he said.

Typhoon Yutu weakened considerably from its earlier super typhoon status over the Pacific Ocean before slamming into the Philippines’ northeastern Isabela province before dawn Tuesday. Aside from the landslides, it also knocked down trees and power posts and ripped roofs off houses and stores, officials said.

The storm weakened further as it blew across mountains and then barreled westward through provinces still recovering from the deaths and devastation wrought by Typhoon Mangkhut in mid-
September.

Yutu blew out into the South China Sea later Tuesday and weakened into a storm, Philippine forecasters said. AP