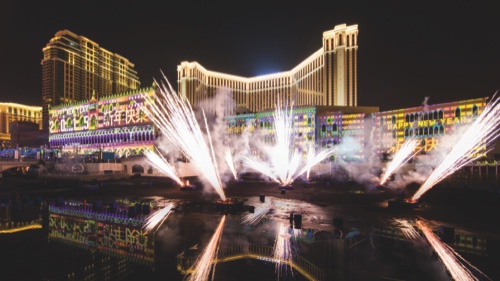 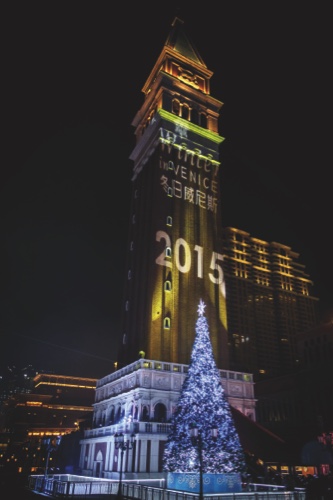 Eve celebrations at Sands Resorts Cotai Strip Macao welcomed thousands of visitors enthralled by the wealth of entertainment options that catered for every kind of reveler, from those who wanted to brave the elements to those who preferred to watch a live feed of the countdown with a glass of champagne in the Venetian’s ballroom.
According to a press release issued by Sands China, “a huge crowd turned up at The Venetian Macao to enjoy the festivities and party atmosphere, saying goodbye to 2014 and ringing in 2015.” The free outdoor “Winter in Venice New Year’s Eve Countdown” event was well attended, with people enjoying live music, dancers and an acrobatic performance by Kinetix. Guests also interacted with street performers, actors and musicians who roamed about delighting children and adults alike.
The highlight for the assembled crowd in the Venetian’s outdoor area was the “3-D Light and Sound New Year’s Eve Countdown Spectacular” which transformed the façade of The Venetian Macao into a countdown clock for the final five minutes of 2014, allowing everyone to usher in 2015 with a midnight pyrotechnics display, after which the festivities continued.
Indoors, many revelers welcomed the new year at “The Venetian Macao’s New Year’s Eve Gala Light Up 2015.” Dressed to the nines, around 1,000 people celebrated with a four-course feast in The Venetian Ballroom. Hit makers and Grammy winners KC and the Sunshine Band thrilled the audience with renditions of their hits “Get Down Tonight,” “That’s The Way  (I Like It)” and “I’m Your Boogie Man,” and conducted a countdown to the New Year with the guests. 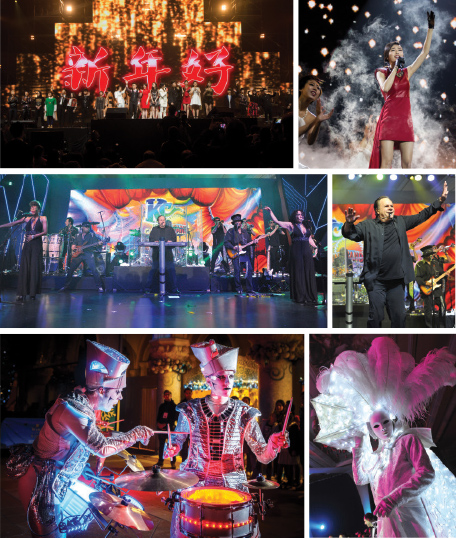 Also entertaining the assembled guests was the “Voice of China” Season 3 champion Zhang Bichen as well as Mo Haijing, a contestant from the same season and singer of the show’s theme song; with the 2013 Cotai Jazz & Blues festival finalists Andy Frasco and the UN also appearing.
“Our Dreams 2015 The Voice of China New Year’s Eve Live Concert in Macao” was also held at the Cotai Arena. The pop fans danced 2014 away as contestants from hit reality TV shows “The Voice of China” and “Sing My Song” took part in a friendly singing competition judged by celebrity singers Yang Kung and Zheng Jun. The two also served as mentors to the 18 singers from “The Voice of China” Season 3 competing with the four singers from “Sing My Song” and brought the best voices of China to Macau. The show was broadcast as part of Dragon TV’s New Year’s Eve program. At midnight all the singers crowded on stage to celebrate the New Year with everyone in the arena.