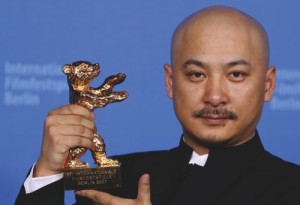 Chinese film director Wang Quan’an, a Berlin International Film Festival winner known for the movies “Tuya’s Marriage” and “White Deer Plain,” has been detained on the charge of hiring prostitutes, Beijing police said yesterday.
Wang is the latest person caught up in a broad anti-vice campaign in which Chinese authorities appear to be making examples out of celebrities accused of engaging in prostitution or using drugs.
Wang was found with a suspected prostitute several days ago in a Beijing apartment and paid the woman 800 yuan (USD130) for the service, police said in a statement. Wang paid for sex services for three nights in a row and on one night had sex with two women at once, the statement said.
Wang was not immediately available for comment.
Though illegal, prostitution is common in China, and authorities periodically crack down on the industry.
Earlier this year, police detained actor Huang Haibo for hiring a prostitute and sent him to a correctional facility for six months. Jaycee Chan, son of the movie superstar Jackie Chan, was detained last month on drug allegations.
Wang, 48, is the acclaimed director of the 2011 film “White Deer Plain.” His 2007 movie “Tuya’s Marriage” won the top Golden Bear award at the Berlin International Film Festival.
Police said they also detained eight other people, including an 18-year-old woman accused of pimping. The others are likely suspected prostitutes, though the allegations against them were not specified. AP