Polish swimmer has to be rescued unconscious

Natalie Charlos of Poland was rescued unconscious from the water during the women’s 10-kilometer race at the start of the European swimming championship yesterday. Alerted by officials and spectators, a lifeguard pulled Charlos ashore, where she was revived. Charlos was recovering well after overexerting herself, Germany team doctor Alexander Beck said. Charlos, who lives and trains in Germany, picked the wrong lane as she approached the finish area. Sharon van Rouwendaal of the Netherlands won the open water event. Eva Risztov of Hungary took the silver, and Aurora Ponsele of Italy the bronze. Daniel Fogg of Britain won the men’s five-kilometer race, ahead of two Germans, Rob Muffels and Thomas Lurz, respectively.

Norwich has suspended two fans from attending matches at its Carrow Road ground while the second-tier club investigates allegations of racial abuse during a league game at the weekend. Norwich received numerous complaints that some fans exhibited racist behavior during a 1-0 loss at Wolverhampton Wanderers in the League Championship on Sunday. The club, which was relegated from the Premier League in May, says it will ban for life any supporters found guilty. 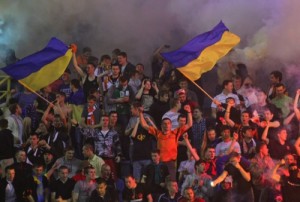 UEFA: No case for Russia yet despite Crimea games

UEFA says no disciplinary case is open against the Russian Football Union despite three Crimean clubs playing Russian Cup qualifying round matches without authority. Ukraine’s football federation urged UEFA and FIFA to act after the matches were played on Tuesday. UEFA says in a statement on Wednesday: “We are in contact with both associations but have no further comments to make at this stage.” Tavria Simferopol lost 2-0 at home to fellow Crimean club SKChF Sevastopol. Zhemchuzhina Yalta also lost 2-0, to visiting Sochi. The clubs are in political stalemate after leaving Ukraine’s league between seasons without UEFA’s permission to join Russian competitions. Still, the RFU has announced all three clubs will enter its third-tier league.