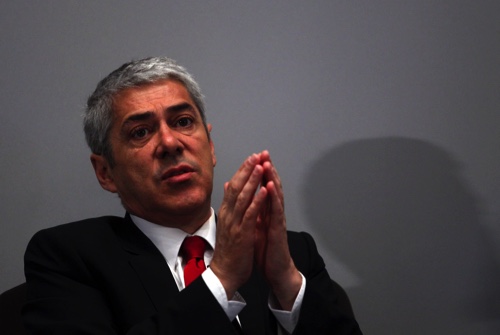 Former Portuguese Prime Minister Jose Socrates has been detained by police as part of an investigation into corruption, money-laundering and tax fraud, Portugal’s Attorney-General’s office said Saturday.
Socrates, who was Portugal’s prime minister from 2005 to 2011, was taken into custody late Friday with three others, according to a statement published by the Attorney-General’s office.
The former center-left Socialist leader was detained when he arrived at Lisbon airport on a flight from another country and spent the night in police custody, news channel S.I.C. Noticias reported.
The investigation is centering on bank transfers, the statement from the Attorney-General’s office said. Those detained were due to appear before an investigating judge for questioning Saturday.
The statement gave no further details, citing Portugal’s judicial secrecy law which forbids the disclosure of details from ongoing investigations.
The 57-year-old former leader’s detention is the third major scandal in Portugal in four months, after the collapse of the country’s largest listed bank, Banco Espirito Santo, and the recent arrest of the head of the immigration service in a corruption investigation.
Socrates, a civil engineer and a former environment minister, won his first general election in 2005 and was re-elected in 2009. As Prime Minister, he visited Macau twice.
Socrates cast himself in the role of a liberal modernizer and introduced abortion on demand and gay marriage in the mostly Roman Catholic country. He also led the development of ecological policies that placed Portugal at the forefront of Europe’s drive to adopt renewable energy.
But his popularity turned sour after the country needed a 78 billion euros (USD96.6 billion) international bailout in 2011, largely due to overspending and high government debt. In a ballot held months after that, he lost. He moved to Paris, where he studied at university and became an international business consultant. Barry Hatton, Lisbon , AP