PRC, US, 10 other countries seek Brexit assurance at WTO 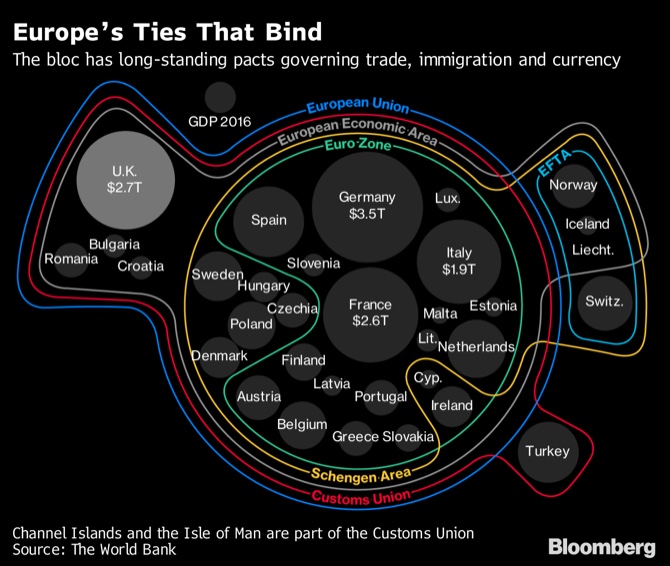 A dozen nations including the U.S. and China demanded the European Union provide a mechanism for “appropriate compensation” to ensure its split with the U.K. doesn’t leave them worse off after Brexit, according to a World Trade Organization document.

The document marks another snag in the EU and U.K.’s plan to unwind their WTO commitments and increases the likelihood of a showdown at the global trade body.

“We urge the EU to provide further assurances to members that it will provide clarity on how it intends to account for U.K.-EU trade; that it will provide for negotiated outcomes that maintain the quality and level of access currently enjoyed to the EU; and that appropriate compensation will be offered where this access is not maintained,” according to the document, which was obtained by Bloomberg.

The document, which was to be discussed at a WTO meeting in Geneva yesterday, was signed by Argentina, Australia, Brazil, Canada, China, Mexico, New Zealand, Paraguay, Taiwan, Thailand, the U.S. and Uruguay.

“Given their considerable, unprecedented scale and scope, these changes are of general and systemic interest to the WTO membership,” according to the paper.

The countries said they were dissatisfied with the EU’s plan to divide its joint WTO tariff rate quota, or TRQ, obligations with Britain and said the bloc has not made any new WTO commitments regarding the future of the EU-U.K. trade relationship, according to the document.

The issue centers on the most important part of the EU and the U.K.’s membership in the WTO — their schedules of concessions, which outline tariff rates and other trade rules by which other countries may sell goods and services to the European marketplace.

Since the U.K. does not possess an independent schedule, it has offered to replicate the EU schedule and split their joint TRQ commitments — which set import limits on hundreds of sensitive goods such as beef, lamb, and sugar. But the signatory countries said the joint TRQ proposal “amounts to a reduction in the quality and level of access provided by the EU to WTO members” that could “affect a globally-significant volume of trade,” according to the document.

“Given their considerable, unprecedented scale and scope, these changes are of general and systemic interest to the WTO membership,” according to the paper.

Though WTO members cannot force the EU and the U.K. to provide market concessions they can block certification of their schedule of concessions and launch WTO dispute settlement proceedings into the matter.

The EU can – and already does – trade on uncertified WTO schedules. However, a negative dispute settlement judgment could require the EU to offer new market-access commitments to any, and potentially all, of the WTO’s other 135 members.Bryce Baschuk, Bloomberg