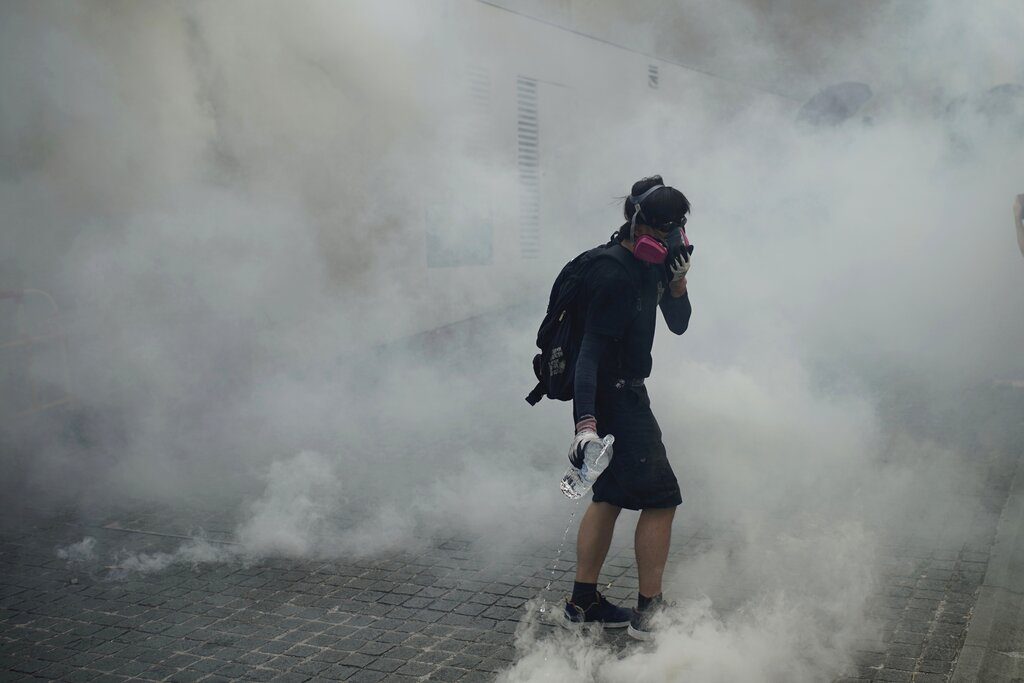 An anti-government protester walks through tear gas smoke during a clash with police at the Wong Tai Sin area in Hong Kong, Tuesday. (AP Photo/Felipe Dana ) 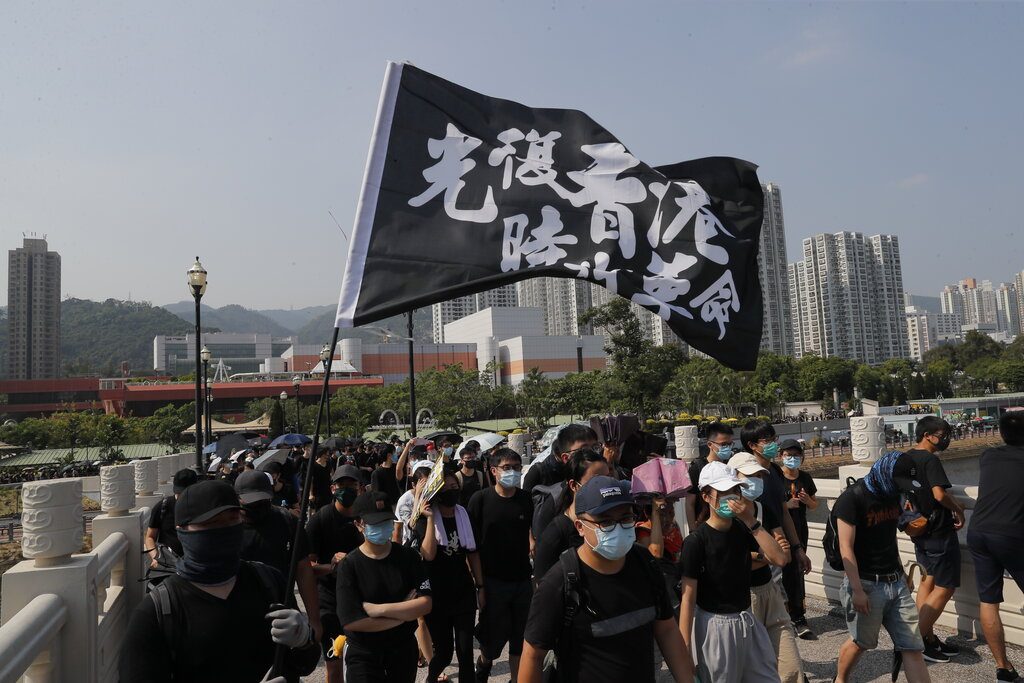 Hong Kong – Tens of thousands of black-clad protesters marched in Hong Kong today (Tuesday) in multiple pro-democracy rallies urging China’s Communist Party to “return power to the people” as the party celebrated its 70th year in power.
Riot police fired multiple rounds of tear gas in at least four locations across the semi-autonomous Chinese territory as protesters engaged in cat-and-mouse clashes that turned streets into battlefields. Dozens of police officers formed a security cordon, backed by a water cannon truck, to prevent protesters from advancing to Beijing’s liaison office.
Organizers said at least 100,000 people marched along a broad city thoroughfare in defiance of a police ban, chanting anti-China slogans and some carrying Chinese flags defaced with a black cross. Police didn’t provide an estimate of the turnout.
“They are squeezing our necks so we don’t breathe the air of freedom,” said King Chan, a 57-year-old homemaker who came out to protest with her husband.
Many demonstrators tossed wads of fake “hell” bank notes usually used at funerals into the air. “The leaders who won’t listen to our voice, this is for them,” said marcher Ray Luk.
The protests began in early June over a now-shelved extradition bill that activists say was an example of how Hong Kong’s freedoms and citizen rights are being eroded. The movement has since snowballed into an anti-Chinese campaign with demands for direct elections for the city’s leaders and police accountability.
Amid a tight security clampdown, thousands of others engaged in stand-offs with police in multiple rallies today in the city.
Riot police repeatedly fired tear gas in the Wong Tai Sin, Sha Tin, Tsuen Wan and Tuen Mun areas as protesters hurled gasoline bombs, bricks and other objects in their direction. The tear gas mostly didn’t deter protesters, who used umbrellas as shields and threw tear gas canisters back at police. Police said protesters used corrosive fluid in Tuen Mun, injuring officers and some reporters.
In Wong Tai Sin, a gasoline bomb that protesters hurled at police exploded near motorcycles parked along a pavement, creating a large blaze that was put out by firefighters. Some protesters placed an emergency water hose down a subway station to try to flood it.
“Today we are out to tell the Communist Party that Hong Kong people have nothing to celebrate,” said activist Lee Cheuk-yan as he led the downtown march. “We are mourning that in 70 years of Communist Party rule, the democratic rights of people in Hong Kong and China are being denied. We will continue to fight.”
Activists carried banners saying, “End dictatorial rule, return power to the people.”
Many shopping malls across Hong Kong were shut amid fears of chaos. Posters in the city called for the Oct. 1 anniversary to be marked as “A Day of Grief.”
Dressed in a black T-shirt and dark jeans, 40-year-old Bob Wong said his clothing expressed “mourning” over “the death of Hong Kong’s future.”
The popular LIHKG online chat forum used by protesters was inaccessible on cellphones, a move believed to have been made to prevent communication by protesters. Nearly two dozen subway stations were closed, and scores of police stood guard outside government offices.
In the morning, as the city’s government marked the anniversary with a solemn ceremony, police used pepper spray to break up a brief scuffle between Beijing supporters and a small group of pro-democracy protesters. Police lined up to separate the groups, but some minor scuffles ensued. Two pro-Beijing protesters were arrested.
Hong Kong Chief Secretary Matthew Cheung told hundreds of guests at a reception that the city has become “unrecognizable” due to violence by protesters. Cheung was representing the city’s leader, Carrie Lam, who led a delegation joining the National Day festivities in Beijing.
Cheung said Beijing fully supports the “one country, two systems” framework that gives Hong Kong freedoms and rights not enjoyed on the mainland. The system was implemented when the former British colony returned to Chinese rule in 1997.
Police warned Monday that hard-line protesters may engage in extreme acts that are “one step closer to terrorism,” such as killing police officers, posing as police officials to kill civilians and large-scale arson, including at gas stations. Activists ridiculed the assertion as a scare tactic.