Protests about N. Korea flag ahead of Asian Games 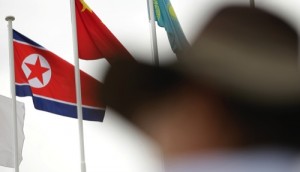 Asian Games organizers have taken down the flags of competing nations flying over South Korean streets following protests about the inclusion of North Korea’s flags.
The national flags of the 45 countries had flown in Incheon and nine nearby cities since last Friday. But they were replaced by flags of the Olympic Council of Asia and ones bearing the Asian Games emblem following the complaints, according to the organizing committee.
Despite the North’s participation in the games, animosity is high between the Koreas, which are separated by the world’s most heavily armed border. North Korea has conducted an unusually high number of rocket and missile test-launches this year, expressing anger over U.S.-South Korean war games. South Korea has rejected the North’s calls for improving ties, citing what Seoul says is a lack of sincerity.
North Korea is sending a 273-member delegation to the games, which includes athletes, coaches and judges, with 94 of them arriving today. The North canceled its previous plans to dispatch cheerleaders in protest at what it calls Seoul’s hostility.
North Korea boycotted the 1986 Asian Games and the 1988 Summer Olympics, both in Seoul, but has since attended several other major sports events held in the South.
North Korean flags were hoisted along with other countries’ flags on South Korean streets during the 2002 Asian Games in Busan and the 2003 University Games in Daegu when South Korea was ruled by liberal governments supporting greater reconciliation with North Korea.
The two countries remain in a technical state of war since the 1950-53 Korean War ended with an armistice, not a peace treaty. Hyung-Jin Kim, Seoul , AP