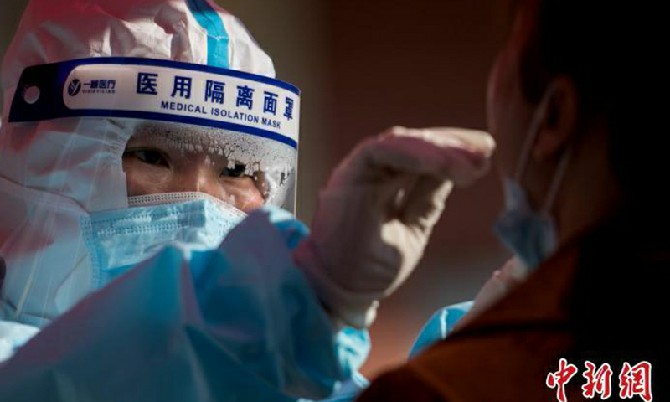 A city in southern China that is trying to contain a coronavirus outbreak told the public yesterday not to leave town, suspended bus and train service and closed cinemas, bars and other facilities.
Anyone who needs to leave Putian, a city of 2.9 million people in Fujian province south of Shanghai, for an essential trip must have proof of a negative coronavirus test within the past 48 hours, the city government announced.
China declared the coronavirus under control in early 2020 but has suffered outbreaks of the more contagious delta variant. Authorities say most cases are traced to travelers arriving from Russia, Myanmar and other countries.
In Putian, 19 new infections that were believed to have been acquired locally were reported in the 24 hours through midnight Saturday, according to the National Health Commission. One was reported in Quanzhou, also in Fujian.
The first cases in Putian were students from Xianyou county, but experts suspect the outbreak might have originated with the father of one student who returned from Singapore on Aug. 4, according to the official Global Times newspaper.
The traveler, identified by the surname Lin, underwent a 14-day quarantine and nine nucleic acid and serologic tests, all of which were negative, the Global Times said, citing local authorities. It said he tested positive on Friday.
Residents of villages in Xianyou where infections were found were barred from leaving, the newspaper said.
Bus and train service to Putian was suspended Saturday, Global Times said.
Elsewhere in Putian, cinemas, card rooms, gyms, tourist sites and other facilities were ordered closed, the city government announced. Restaurants and supermarkets were told to “strictly control” customer numbers and to check for fevers. Schools were ordered to require students to wear masks in class.
Experts were sent to Putian to oversee disease-control work, the Health Commission announced Saturday.
China has reported 4,636 coronavirus deaths out of 95,199 confirmed cases. MDT/AP