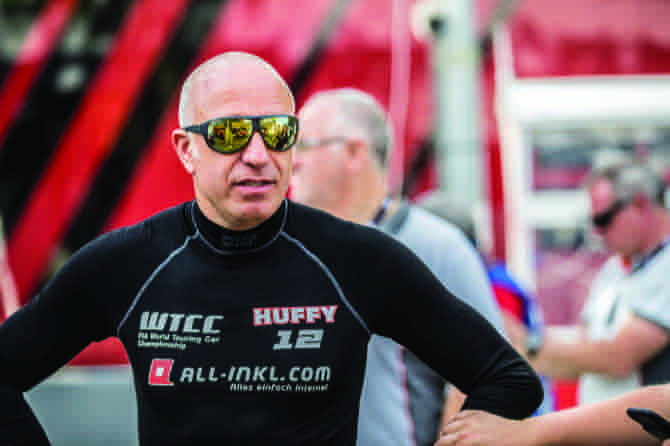 Known for many things, including his sympathy and irreverent style that led to some of the most unusual ideas for car liveries such as the “sharpen shark teeth” or the renowned “Eat my Dust” displayed on the back of many of his cars, Dutch Tom Coronel is one of the most renowned names in  automobile racing and of the Guia circuit, where he started to race over 20 years ago.

Back to Macau with the return of the World Touring Car Championship (WTCC) this year after an absence of two years (2015 and 2016) where the Guia Race was conducted under TCR regulations, Coronel (45) is back to make the competition “Eat his Dust.”

To learn more about his thoughts on this comeback and also on his career perspectives we spoke to Tom Coronel ahead of the Macau Grand Prix.

Macau Daily Times (MDT) – How do feel about Macau and to be back to its streets after two editions off the Grand Prix?

Tom Coronel (TC) – Macau is magical in everything so I’m very happy to be back again. It’s [for me] the most challenging track together with the Nordschleife Nurburgring – the best.

Every year when I return to Macau I see that things changed a lot so I’m expecting that after two years I’m finding [it’s] different again.

I really saw many changes [across the years] after my first visit to race back in 1996 with F3. Twenty-one years later, I can say I have seen a lot happening.

MDT – As you mentioned, you have been racing in Guia Circuit for many years. Do you think all that accumulated experience can make some difference during the upcoming Macau GP WTCC Event?

TC – Yes, this is one of those circuits where you need experience [to succeed]. Last time I [raced here] I qualified P3 (third place) behind the factory Citroens in what was a big achievement [taking in note] my car. But I do attribute that achievement to the fact that I know the track very well and know exactly where are the many places where you need to “stay cool”, and also the other places where you can make time.

MDT – How do you perceive the upcoming future of touring car races?  Does WTCC have a future?

TC – Of course it has, it is the best there is and puts on a good show for the people as they see cars that they recognize from the streets racing but I hope that we go back to our cars [specifications] like we had about four years ago. More manufacturers and better competition because nowadays [with current regulations] only the factory teams can score well. As a privateer, to have won two races last year was already special.

Let’s get less “downforce” and more “rubbing”… bumpnig a bit is a part of racing [Coronel smiles]. So please get TCR [regulations] back.

MDT – What is the first thing that comes to your mind when you think about the Macau Race?

TC – If you crash your confidence is down 50 percent and this is a handicap that you carry for the rest of the weekend.

But I love this long fast street circuit so it’s with great joy I’m coming here again. I did miss Macau on our calendar for the last two years.

MDT – Over these 21 years how many times have you raced in Macau?

TC – I [actually] should try to count how many times I raced here… Maybe 12-15 times, I need to double-check [to confirm the exact number].

MDT – The 2017 season of WTCC is almost closing, what will do next?

TC – Racing, Racing, and more Racing, for the rest of my life! First [in the programme] is the Dakar Rally that I will race again together with my brother and after that I’ll start preparing for 2018, and, of course, in touring cars.

One thing is certain I won’t stop racing never; it’s my way of life already for the past 28 years. Eat My Dust!

MDT – You have been presented before as one of the racers to be involved in the upcoming Electric GT Championship. What the status on that championship?

TC – I don’t know much about it for the time being but I know there is a future in it [EV racing] so let’s wait and see… But it will happen, I’m sure, just if you ask me exactly when… That I don’t know yet!