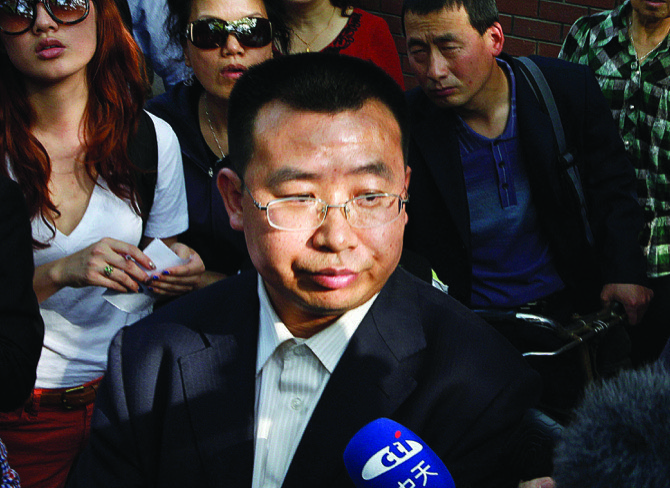 Jiang Tianyong speaks to journalists back in 2012

A prominent Chinese human rights lawyer disappeared on the day of his scheduled release from prison yesterday and was reportedly taken away by unknown persons.

Jiang Tianyong, who defended politically sensitive clients like blind legal activist Chen Guangcheng and followers of the outlawed Falun Gong spiritual group, had completed a two- year sentence handed down for crimes against the state.

But supporters who arrived at the prison in central Henan province were told that unknown individuals had already picked him up and taken him away, said his wife Jin Bianling.

“The Chinese government is so shameless,” Jin said in a phone interview from Los Angeles, where she lives with their 16-year-old daughter.

“He’s completed his sentence now, so he should be free,” she said. “Is Chinese law just a piece of scrap paper?”

Jiang’s sister and father have also been missing since Wednesday afternoon, when state security agents were supposed to be escorting them to the prison, Jin said.

China has increasingly placed those it considers dissidents under various types of extra-legal detention even after they have served their sentences, with no due process or additional charges filed. Chen, the blind legal activist, was confined for years at his home in a northern Chinese village, guarded around-the-clock by hired thugs until his escape in 2012.

Environmental activist Wu Lihong has been restricted to his home in the eastern city of Wuxi under constant surveillance since his release in 2010 after serving a three-year sentence over allegedly trumped-up charges of financial crimes.

Such restrictions are tightened during politically sensitive occasions, such as next week’s start of the annual session of China’s rubber-stamp parliament, the National People’s Congress.

Jin said Jiang’s sister visited him earlier this month and reported that he was in poor health. His skin tone was darker, he appeared gaunt, and his lips were cracked, Jiang’s sister told Jin. He requested that his sister pick him on his release date and bring him to their ancestral home in Henan’s Luoshan county.

On Tuesday, however, state security agents visited Jiang’s parents and said he would not be permitted to return home, and would instead be sent to Zhengzhou, Henan’s capital, where the government would determine his housing and employment.

The next day, state security agents said they would escort Jiang’s sister and father to the jailhouse to meet him upon his release. The two have since been unreachable, Jin said, with their cellphones shut off despite a prior promise to call Jiang’s mother when they arrived at the jail.

Prior to Jiang’s arrest in 2016, he had worked to publicize the plight of lawyers arrested in a sweeping crackdown on legal advocates that began in July 2015. He was forced to stop practicing law in 2009, after authorities refused to renew his legal license.

Jiang was sentenced in 2017 to two years in prison for inciting subversion of state power, a vague charged often levied against human rights activists. Prosecutors accused Jiang of using social media platforms to denigrate the government and judicial authorities said he incited others to subvert state power, including fabricating claims that another lawyer had allegedly been tortured in custody.

Jin said she worries about her husband’s health, as he suffers from high blood pressure.

“Our daughter was looking forward to talking to her father,” Jin. “Now what can we do?” Yanan Wang, Beijing, AP