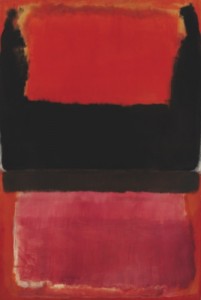 A radiant painting by Mark Rothko and one of Jasper Johns’ iconic flag paintings were among the stars at the second day of New York’s dazzling post-war and contemporary art auctions.
“No. 21 (Red, Brown, Black and Orange),” which was purchased by art benefactors Pierre and Sao Schlumberger directly from Rothko’s estate, brought in USD45 million at Sotheby’s. Its pre-sale high estimate was $50 million.
Schlumberger died in 1986; his wife passed away in 2007. They were central figures in New York and Parisian society who helped fund the restoration of Versailles. They also were patrons of the Pompidou Center, The Museum of Fine Arts in Houston and the Museum of Modern Art and Lincoln Center in New York.
The abstract 1951 work came up for bid a day after the auction house sold two other paintings by Rothko from the estate of Listerine mouthwash fortune heir Rachel “Bunny” Mellon for a combined total of $76 million.
Rothko’s “No. 21” has never previously been offered at auction. The painting was first exhibited in the seminal exhibition “15 Americans” at the Museum of Modern Art in New York in 1952, a year after it was created. It has not been exhibited since a traveling retrospective of Rothko’s work in 1971-72.
The current Rothko auction record is $86.8 million for “Orange, Red, Yellow.”
Another highlight was Johns’ “Flag.” It brought in $36 million, a record for the artist’s work at auction. The painting at Sotheby’s was acquired directly from the artist in 1983 and had remained in the same private collection since then. It recently was on loan at the Philadelphia Museum of Art and previously exhibited at the Rhode Island School of Design and Yale University Art Gallery. “Flag” was estimated to fetch between $15 million to $20 million.
An Andy Warhol portrait of Elizabeth Taylor also garnered top bids. Painted in 1963, “Liz #3 (Early Colored Liz)” fetched $31.5 million. It’s one of a rare series on the actress produced by Warhol on colored backgrounds.
Other Warhol portraits included “Brigitte Bardot,” which sold for $11.6 million, and “Self-Portrait (Fright Wig),” which was bought for $11.3 million.
All prices included the buyer’s premium. Ula Ilnytzky, New York, AP