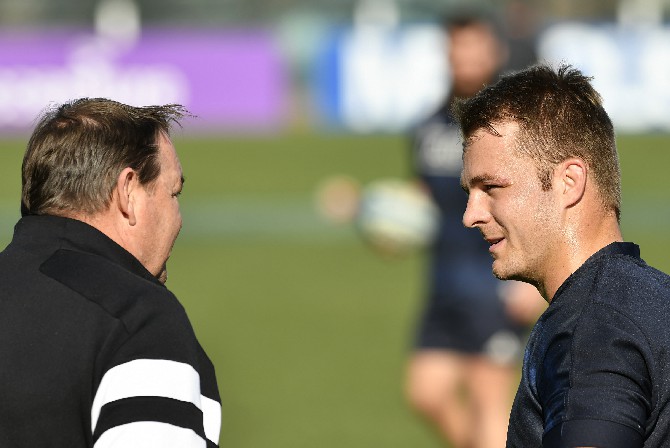 Sam Cane has been selected as the New Zealand All Blacks captain, succeeding Kieran Read, who retired from test rugby after last year’s World Cup.
New coach Ian Foster made the announcement this week, even though there is no indication when the All Blacks will play again because rugby has been shut down amid the coronavirus pandemic.
The 28-year-old Cane has been a regular in the New Zealand No. 7 jersey since the retirement of Richie McCaw in 2015, appearing in more than 60 tests. His appointment as captain ahead of strong candidates such as lock Sam Whitelock is a surprise as he continues to face competition for his place in the New Zealand backrow.
New Zealand has produced some great No. 7s, among them McCaw and Michael Jones, and has routinely had a No. 7 as captain, but Cane is not of that quality yet, and is a quiet and unassuming player. While he has captained the All Blacks three times and the Chiefs Super Rugby team more regularly, his leadership skills are still relatively immature.
He was the fifth youngest All Blacks captain when, at 23, he led New Zealand against Namibia in 2015. He has also led the team against Italy and Argentina.
“As I’ve spent more time in the All Blacks and grown as a player, I’ve become a lot more comfortable being a leader in the team,” Cane said. “The great thing about the All Blacks is that the leadership group is full of captains and experienced players already so I’m just really looking forward to working closely with that group and doing my best to lead them and the rest of the squad.”
Foster said the All Blacks captaincy was one of the most important jobs in New Zealand, and Cane was ready for the responsibility.
“Sam is an experienced All Black with eight years in the team now and is a ‘follow me’ type of leader and a very good thinker in the game,” he said. “He has a natural ability to connect with everyone in the team and is straight forward and direct when he needs to be.
“There’s massive respect for Sam among the players and management.”
Cane made a remarkable recovery last year from a neck injury to resume his test career. He has played since without any obvious impediment, as a hard-working but unspectacular loose forward.
“My style as captain will be to not really change the way I do things,” Cane said. “I’m just myself and will continue to be.
“I already work on building relationships, especially with the younger guys in the squad, and everyone else connected with the team.”
Foster’s announcement was unexpected, coming outside any wider All Blacks squad announcement. It’s timing meant it fell at a difficult time in the news cycle, after nightly news bulletins, and achieved less impact than it typically would.
Cane’s appointment has been construed in part as an effort by Foster to solidify his leadership as he takes over the All Blacks after an appointment process in which he faced strong opposition from successful Crusaders coach Scott Robertson. He has been able to hand pick his assistant coaches and now his captain, ensuring a loyal leadership group.
Cane has played all of his Super Rugby for the Hamilton-based Chiefs, the team which Foster also played for and later coached. His appointment breaks a more than decade-long era in which the Crusaders provided the All Blacks captain — Read following McCaw. STEVE McMORRAN, WELLINGTON, AP