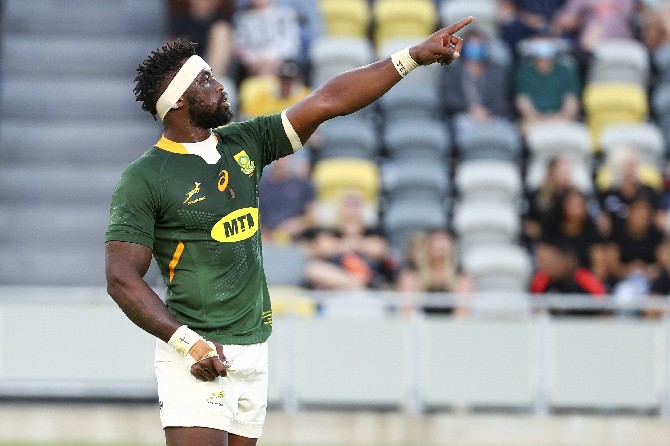 South Africa made two injury-enforced changes to its 23 for a second meeting with New Zealand in the Rugby Championship as coach Jacques Nienaber indicated the Springboks would continue with their highly criticized style of play that’s based on set-piece dominance and tactical kicking.
That style was the Boks’ “DNA,” Nienaber said.
The changes to the team announced yesterday were because tighthead prop Frans Malherbe and replacement loose forward Marco van Staden were out with injury.
Ox Nché is in for Malherbe, although Nché will start on the loosehead against the All Blacks on the Gold Coast on Saturday, and Trevor Nyakane switches to tighthead. Jasper Wiese was recalled to replace Van Staden on the bench.
Wing Cheslin Kolbe was in line to make his return from a leg injury that ruled him out of South Africa’s two losses against Australia and the defeat to New Zealand last weekend, but the injury flared up again at yesterday’s training session, Nienaber said.
Nienaber said he opted for continuity after coming close to beating the All Blacks, who won 19-17 last Saturday with a late penalty by fullback Jordie Barrett. That sealed the Rugby Championship title for New Zealand ahead of the last round of games.
“We made a big step up in terms of our performance last week and having reviewed the match, there is no doubt we delivered a performance worthy of a victory,” Nienaber said.
But the world champion Springboks are facing four straight defeats to finish the Rugby Championship.
“We know it is going to take a colossal 80-minute effort, but the drive to succeed and motivation to win this weekend is as big as it gets,” Nienaber said. “Last week we stuck to our DNA and style of play and with a little more luck we could have come away with the result, so we need to ensure that we are better at it this week.” MDT/AP