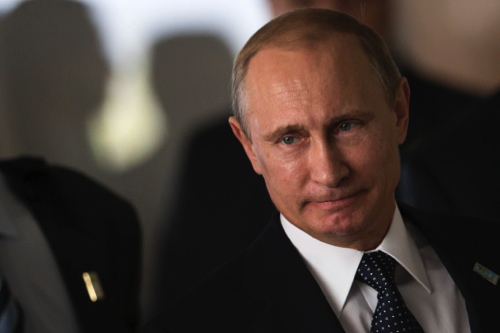 Russia’s central bank promised to support financial institutions hit by U.S. sanctions as stocks took a tumble in Moscow yesterday.
In an online statement, the bank promised to “take adequate measures” to support targeted institutions. Russia’s state-owned VTB bank — Russia’s second-largest — was down 0.5 percent yesterday morning.
Other major banks that were left unscathed by sanctions — such as the country’s largest, Sberbank — were trading higher. Russia’s MICEX benchmark index added 2.3 percent from its previous closing.
U.S. officials said Tuesday that roughly 30 percent of Russia’s banking sector assets are now constrained by sanctions.
The move comes after Malaysia Airlines Flight 17 was shot down over eastern Ukraine. Western officials accuse pro-Russian separatists of bringing down the plane with a missile supplied by Moscow.
The West also halted future sales to lucrative Russian economic sectors, with the U.S. announcing plans to block future technology sales to the oil industry and Europe approving an arms embargo. The Europeans on Tuesday also backed sanctions against state-owned banks and the energy sector, though the specific EU targets won’t be made public until later in the week.
Western officials insist the new sanctions will damage an already struggling Russian economy. The International Monetary Fund has slashed Russia’s growth forecast for this year to nearly zero, down from 1.3 percent last year, and the U.S. says more than USD100 billion in capital is expected to flow out of the country.
“Russia’s actions in Ukraine and the sanctions that we’ve already imposed have made a weak Russian economy even weaker,” President Barack Obama said Tuesday.
It remained uncertain whether the tougher penalties would have any impact on Russia’s actions in Ukraine — nor was it clear what further actions the U.S. and Europe were willing to take if the situation remains unchanged. In the nearly two weeks since the Malaysia Airlines plane was felled in eastern Ukraine, Russia appears to have deepened its engagement in the conflict, with the U.S. and allies saying that Russia was building up troops and weaponry along its border with Ukraine.
Europe has a far stronger economic relationship with Russia than the U.S. does, and until this week European Union leaders had been reluctant to impose harsh penalties — in part out of fear of harming their own economies.
EU President Herman Van Rompuy and the president of the European Commission, Jose Manuel Barroso, said the sanctions sent a “strong warning” that Russia’s destabilization of Ukraine could not be tolerated.
“When the violence created spirals out of control and leads to the killing of almost 300 innocent civilians in their flight from the Netherlands to Malaysia, the situation requires urgent and determined response,” the two top EU officials said in a statement.
The new EU sanctions put the 28-nation bloc on par with earlier sector sanctions announced by the U.S. and in some cases may even exceed the American penalties.
Obama said coordinating Tuesday’s actions will ensure that the sanctions “will have an even bigger bite.”
Despite the West’s escalation of its actions against Russia, Obama said the U.S. and Europe were not entering into Soviet-era standoff with Russia.
“It’s not a new Cold War,” he said in response to a reporter’s question.
German Foreign Minister Frank-Walter Steinmeier pressed for a diplomatic effort to calm the situation in Ukraine, saying Wednesday that “sanctions alone are not a policy, so we must continue to seek opportunities to defuse the conflict politically.”
A meeting planned in Minsk this week between the contact group and representatives from eastern Ukraine “must agree steps on the road to a cease-fire,” Steinmeier said in a statement.
He renewed a call on all sides to allow unrestricted access to the Malaysia Airlines crash site. “It is intolerable that, two weeks after the crash, it is still not possible to bury with dignity the dead who remain at the crash site,” he said.
Australia’s Prime Minister Tony Abbott said yesterday he was focused on the Malaysia Airlines disaster and was not considering ratcheting up sanctions against Russia.
“I’m not saying that we might not at some point in the future move further. But at the moment, our focus is not on sanctions; our focus is on bringing home our dead as quickly as we humanly can,” Abbott told reporters. AP 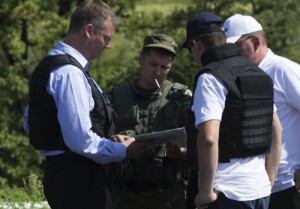 International observers turned back yesterday after making another attempt to reach the site where Malaysia Airlines Flight 17 went down in eastern Ukraine, and a government official said the area near the zone had been mined by pro-Russian separatists who control it.
Observers from the Organization for Security and Cooperation in Europe set out yesterday in two vehicles — without frustrated crash investigators from the Netherlands who have been trying to reach the site for four days.
But the OSCE observers turned back to the city of Donetsk after discussions with rebels.
Safety concerns and hindrance from the separatists who control the area have kept the investigation team away. Foreign governments whose citizens died have complained the site is not secured and some human remains have not been recovered.
Government security spokesman Andriy Lysenko added to those concerns yesterday by saying separatists “have mined the approaches to this area. This makes the work of the international experts impossible.”
Lysenko was asked at a briefing about concerns that Ukrainian efforts to win back territory were increasing fighting in the area and slowing access. He said that Ukrainian troops weren’t conducting operations against the separatist near the site, but were trying to cut off their supply lines to force them to leave the area.
Elsewhere, Ukrainian forces took control of the town of Avdeevka, just to the north of the rebel stronghold of Donetsk.
Local officials said fighting over the past 24 hours killed 19 people in the region.